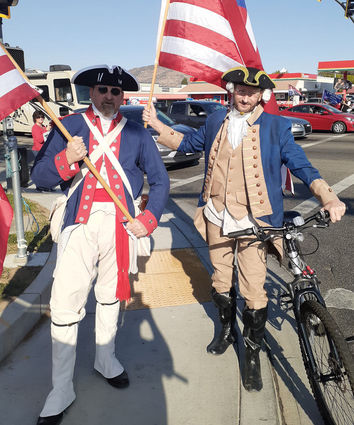 The turnout was indeed terrific for our fifth and final Tehachapi rally, with attendance conservatively amounting to about 750 rallygoers, more than a few of them coming from Bakersfield, Mojave, Rosamond and other communities near Tehachapi. The rally took place Friday, October 30, from 3 to 6 p.m. at our usual location (Tucker Rd. and Valley Blvd.).

While many of the folks were attending their third, fourth or even fifth rally, we did have an exciting newcomer this time – war hero and President George Washington himself! If it wasn't old George, it was a darn good imitation! Once again, Drew and his wife, Marissa, owners of Goodfellas Mobile Detailing and the Tipsy Wagon, provided awesome music. Along with the music, Drew and Marissa's Tipsy Wagon offered soft drinks for free (and adult beverages for tips only). As he had at our four previous events, Barry Simonton was on hand to take signatures for the ongoing Governor Newsom recall effort.

Once again, what struck me as so memorable about this rally – and all the others for that matter – is how positive and joyful it was for everyone. And, as always, a great part of the fun was the interaction between the rally goers standing on the sidewalks (or sitting on the grassy knolls) and the endless caravan of cars and trucks that rolled by with their flags and signs – smiling, waving, honking in support of all of us and our president. Last but not least, several vendors offered Trump merchandise of all kinds.

A huge thank you to Rick Torres of RST Cranes for providing the amazing giant flag which has flown over every Trump rally and to our Tehachapi Police Department and California Highway Patrol who surveilled the rally about every half hour. 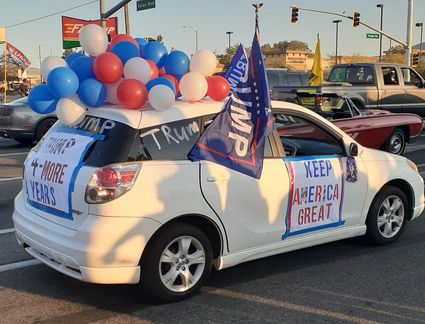 We did what we could. We exercised our First Amendment rights and let all Tehachapi know that we stand united in support of our president. When this article appears, the election will have been held and we will hopefully have more information as to whether or not there is a definitive outcome or whether we have commenced the beginning of a possibly long legal battle to determine the next President of the United States. Regardless, let us hope that we can remember that we are, first and foremost, not Republicans or Democrats, but Americans, who despite our often pronounced differences, share a common love for the greatest and most exceptional country on Earth, the United States of America.