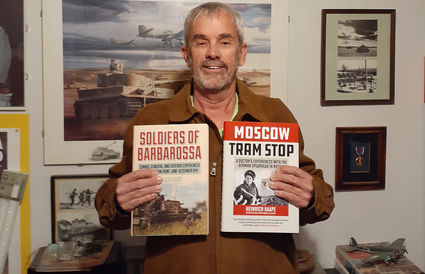 Dr. Luther is a former Fulbright Scholar (Bonn, West Germany). He completed his Ph.D. in Modern European History at UC Santa Barbara in 1987. He was employed as a military historian by the U.S. Air Force for 27 years (16 at McClellan AFB, outside Sacramento, then 11 years at Edwards AFB). Several years ago, he republished an older work with a healthy amount of new material and has since published four completely new books. He has concentrated his recent research and writing on Hitler's attack on the Soviet Union in June 1941, which led to the most terrible conflict in human history (over 4,000,000 German soldiers were killed in Russia along with 27,000,000 Russian dead, about equally split between soldiers and civilians). This terrible conflict, which led to the beginning of the Holocaust (culminating in the creation of the state of Israel) ultimately brought Soviet power into the depths of Europe, helping to launch the "Cold War" between the U.S. and the Soviet Union which still reverberates with us to this day.

In 2014 "Barbarossa Unleashed: The German Blitzkrieg through Central Russia to the Gates of Moscow, June-December 1941," was released. In 2018, "The First Day on the Eastern Front, Germany Invades the Soviet Union, June-December 1941," was released. Both books were very well received and Dr. Luther was accredited as an internationally respected WWII scholar. "Barbarossa Unleashed" was hailed by reviewers as a "landmark study," "unprecedented in scope and analysis," while "First Day" was selected by the prestigious aggregator/reviewer of WW2 books, "Stone & Stone WW2 Books" as one of the half dozen best books released on WW2 in 2018. Numerous trips to Germany were made by Dr. Luther to interview German veterans and conduct archival research, as well as two trips to Russia.

The latest two books, both released in 2020, are "Moscow Tram Stop" and "Soldiers of Barbarossa." For more information on Dr. Luther's works, he can be contacted directly at his email address luther.craig@yahoo.com.