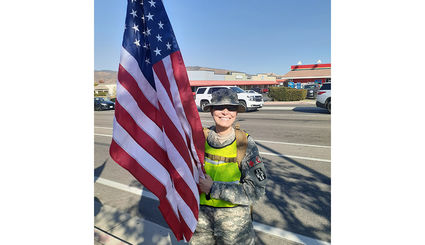 She walked alone dressed in her fatigues, carrying the American flag. Wreaths Across America honors veterans every year in December by laying wreaths on their graves in a ceremony meant to Remember the Fallen, Honor and Teach. Blue Star Mothers are mothers of deployed service members who assemble Christmas care packages annually to send to deployed military from all branches of service. Several Blue Star mothers from Lancaster Chapter 14 traveled up from Lancaster to support Christine's fundraising efforts.

The mission statement from the Wreaths Across America website states: "While we have veterans Day in the fall and Memorial Day in the spring, our servicemen and women sacrifice their time and safety every single day of the year, to preserve our freedoms. And in many homes across the U.S., every day there is an empty seat for one who is serving, or one who made the ultimate sacrifice for our country. That is why our mission to Remember, Honor [those who serve] and Teach [children the value of freedom] lasts all year long, far beyond the single day in December when we coordinate wreath-laying ceremonies. All throughout the year, Wreaths Across America works in a number of ways to show our veterans and their families that we will not forget-we will never forget."

Christine received over $1,000 in donations for her walk and another $1,000 from raffle ticket sales at Red House BBQ. Mano, owner of Red House BBQ, is also donating half of the $19.95 purchase price for his tri tip dinner from the fundraiser he hosted during the evening of October 30. There was also a booth at the local Trump Rally in the afternoon collecting additional donations.

Christine succeeded in providing our local chapter of Wreaths Across America with the additional funds they need to decorate the cemeteries in December and any residual funds will be donated to the Blue Star Mothers.

Christine is also working on a short film titled PTSMe. The film is still in production and is not yet released. The theme regards veterans with PTSD. About 7 to 8 percent of the population will suffer from PTSD at some point in their lives.

The next fundraising event, a Christmas Boutique, will be held Saturday, November 7, at Big Papa's Steakhouse from 10 a.m. to 4 p.m. featuring 30 vendors. Christine's booth will display a huge selection of handmade jewelry, Santa will be available between 10:30 a.m. and noon, and Tehachapi's very own Miss United States, Tiffany Rea, will be present from noon until 2 p.m.

The local Wreaths Across America ceremony will commence at 9 a.m. Saturday, December 19, at Westwide Cemetery with a second ceremony following at the Eastside Cemetery. Volunteers are welcome to assist in laying out the wreaths. An evening ceremony will be held Friday evening at 6 p.m., December 18, at Freedom Plaza to which the public is invited.

Air Tight Heating and Air/5150 Dieselz are continuing to collect donations at their office at 20021 W. Valley Blvd., Ste. B, Tehachapi until December 1. Donations can also be made directly to Jim Jacobs, coordinator for Tehachapi's Wreaths Across America, via email at jj33503@comcast.net.