Last photo of Dick and Ellie.

In December 2018 Silver West Records and Sound Barn Music Productions released the album "Range Riders – The Miracles of Christmas," a project that included a song "The Miracle of Miracles" composed by local Tehachapi resident and famed Hollywood manager Dick Baxter. While best known as the personal manager for such Hollywood "greats" as Dale Evans, Roy Rogers and Kathryn Grayson, the farm kid from Indiana had dabbled in songwriting since he was a teenager and formed Dick Baxter Publishing when he moved to Los Angeles in the 1960s and formed Dick Baxter Management. The company is still active and licensed with ASCAP.

In January 2020, Baxter received an award from Silver West and Sound Barn naming "The Miracle of Miracles" (words and music by Dick Baxter) the Inspirational Song of the Year 2018/2019. Jesse Hanna, lead singer for the country group Range Riders wrote, "Your song 'The Miracle of Miracles' was inspiration to this project and to each of us as we moved forward with production. Without your song this project would have never happened. We know that countless others have also been inspired listening to the message in your song as well." Baxter's award arrived in Tehachapi at the end of March, eliminating any possibility of public recognition.

Baxter had originally composed "The Miracle of Miracles" in the form of a poem in the late 1960s and had always wanted to set it to music. Years later, on a trip out to Apple Valley to visit Dale Evans, Baxter heard his wife of Ellie hum a tune he thought would be perfect for the poem. He showed it to Capitol Records who loved the song but the right artist never appeared. In 2017 Hanna, who owns Silver West Records, heard the song and knew it would be a perfect fit for his "The Miracles of Christmas" album. Hanna and Baxter made the decision to record the song in the standard Country style as opposed to a more "pop" genre and the result was stunning. Hanna made "The Miracle of Miracles" the first trac on the "The Miracle of Christmas" album. The album was first available on iTunes and YouTube before the release of a CD. This holiday season, "The Miracles of Christmas" album will be available locally at the Tehachapi Christian Store located at 108 E. Tehachapi Blvd.

In the course of a recent interview with Baxter concerning his award, he mentioned that he had contributed to a new book of dog stories written by Southern California author Tricia Spencer. The book "Forever Dogs – Wagging Tails Telling Tales" contains a story about Cheyenne, a pup that once belonged to Dick and Ellie. Baxter said he met the author after she had written a book in 2011 on Roy Rogers and Dale Evans called "The Touch of Roy and Dale." Spencer had acquired a box of 40,000 letters and fan mail from the Rogers family during an estate sale. After seven years the letters became two books on the couple. Baxter had been Dale Evans' manager for most of her career and for Roy Rogers beginning in 1989. He contacted Spencer, introduced himself and was a contributor to "The Touch of Roy and Dale, Volume II" in 2013. Spencer's new "Forever Dogs" will also be available during this Christmas holiday season at the Tehachapi Christian Store.

Dick and Ellie Baxter were married on December 9, 1955 when both of them worked for an Indiana insurance company. They met Roy and Dale in 1959 when Dick was working on publicity for the Indiana State Fair. The Baxters moved to California in 1961 and Dick Baxter Management soon followed. They revived their acquaintance with Roy and Dale and Dale asked Dick to be her manager, a relationship that lasted until Dale passed away in 2001. 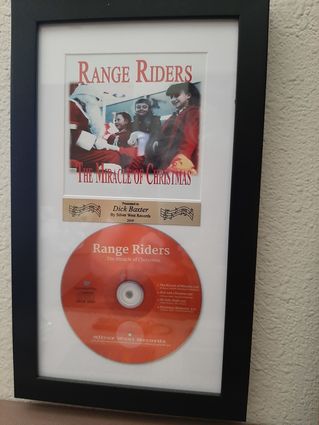 Ellie Baxter passed away on May 5, 2020 following a tragic accident at their home. The couple would have celebrated their 65th wedding anniversary this December. The last photograph of Dick and Ellie was taken about a year ago by Jamie Williams of Tucson, Arizona. Williams is known for her American Cowgirl photographs. Baxter had been instrumental in connecting her with the Rogers family about 20 years ago when she took what would be the last photograph taken of Dale Evans.