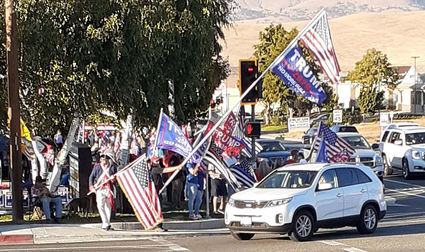 On Saturday, October 17, we conducted our fourth Re-Elect President Trump rally in Tehachapi since late July. There were only about 500 folks in attendance (our last rally in late September drew close to 1,000), due in part to competing Trump rallies taking place in Bakersfield at the same time. All of our participating "Trump Troops" were excited to be among like-minded spirits and fully engaged in supporting the president's re-election.

There were smiling, joyful faces everywhere, among a veritable sea of flags, signs and Trump merchandise sold by several vendors at the event. What most delighted me, however, was the stream of vehicles (cars and trucks) and massive commercial trucks that rolled passed us in a seemingly endless procession-smiling, waving, honking and proudly displaying their U.S. and "Trump 2020" flags.

All of our rallies have elicited many honks and cheers (and, admittedly, a few thumbs down as well) from passerbys in vehicles, but the level of support we received at this rally was something I had not witnessed before; it was truly unprecedented, revealing that support for our president in Tehachapi and Kern County is stronger than ever.

Once again, we had great music offered by several folks, who set up their systems across our rally venue, so no matter where you went, there was terrific country, rock and patriotic tunes wafting through the early fall air. In this regard, I want to give a big shout out to friend and patriot Greg Brown, who labored ceaselessly for days to put together a play list (everything from ACDC's "Thunderstruck," one of my favorite songs, to Tchaikovsky's 1812 Overture and Lincoln's Gettysburg Address). And his music system sounded great! Finally, Barry Simonton, who's worked indefatigably on the Governor Newsom recall effort, was once again in his booth-taking dozens of signatures to add to the thousands he's already collected.

Our fifth and final rally will take place at the same location (Tucker Rd. and Valley Blvd.) on Friday, October 30, just four days before the election!

Trump Troops!: We want to make this final rally a pro-Trump "bash" that they'll still be marveling over in Tehachapi 100 years from now! So get the news of the rally out to everyone; bring yourselves, family members and friends, and stand up for America and four more years of a Trump Presidency.

It's all hands on deck!