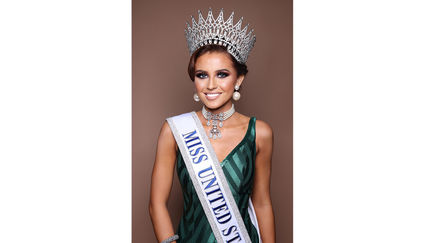 Franz Orban for The Code Productions and The United States National Pageants.

"The two most important days in life are the day you are born and the day you find out why." – Mark Twain

She won the title Miss California United States on August 9 which allowed her to proceed to the national Pageant. The Pageant was originally scheduled to take place at the SouthPoint Hotel in Las Vegas, Nevada; however, neither the city of Las Vegas nor the state of Nevada was able to provide adequate and acceptable safety protocols in time to host the 2020 United States National Pageant there this year. The PGA National Resort & Spa in Palm Beach Gardens, Florida, had already been high in the running for hosting future Pageants, and the organization was thrilled to be able to relocate the National Pageant to this venue sooner than expected.

The mission of the United States National Pageants, unlike some of the other Pageants, is to be an inclusive sisterhood designed to prepare its participants for lifelong success. It does so by helping develop each individual's inner light, beauty and contribution no matter what their shape, size or color.

Tiffany relates that this was her first time flying to the East Coast, exciting in itself. The Pageant included an interview, swim suit competition, evening gown competition and a 60-second speech outlining the contestant's Personal Platform Promise in which they explained their platform and their plans on implementing it throughout the year if they win.

Due to COVID restrictions, the dynamics of the Pageant were altered. Instead of the opening dance featuring all of the contestants, numbering about 150 through all age groups, they participated in a fashion show allowing for more social distancing. Designer Johnathan Kayne provided each contestant with her own individual gown, tailored especially for her. As one of the Pageant perks, each contestant was able to keep the gown. Kayne also ran his own contest partnering with Sydney's Closet (plus size fashions) in which delegates wrote an essay about what beauty means to them, the goal being for each girl/woman to feel beautiful in her own way. The winner is ambassador for a year representing the Kayne brand and Syndey's Closet.

As one of the national Pageant winners, Tiffany will travel to Nashville to work with Kayne to design the opening number dress for the 2021 Pageant. Tiffany mentioned that Kayne is very warm and personable, so it should be very enjoyable to collaborate with him on the gown designs.

When asked what her year will look like as Miss United States, Tiffany related that it is up to the title holders to design their year and the Pageant organization provides the resources. Typically, the first runner-up for Miss California United States will take over Tiffany's duties in California.

Tiffany's platform, volunteering through mentorship in which she has integrated her human trafficking work, is continuing to expand and Tiffany is planning on establishing a local group to train in Internet and social media safety.

Very shortly Tiffany will be employed full time at the Tehachapi Police Department as a dispatcher and will be continuing college studies online full time as well.

Both of Tiffany's parents were lucky enough to travel with her to Florida and were allowed to watch the Pageant in person. All three are still in shock over Tiffany's title; however, Tiffany relates that her father is telling everyone he meets about his daughter's winning the United States title. She says he is somehow mysteriously working it into every conversation.

Tiffany is sponsoring a blood drive through Houchin Community Blood Bank titled, "Crown for a Cause" which is scheduled for November 1 from 11 a.m.-3 p.m. at TK's Pizza located at 640 W. Tehachapi Blvd. TK's is offering free cheesy bread with any meal with proof of blood donation.

We are all so proud of you, Tiffany! Have a great year!