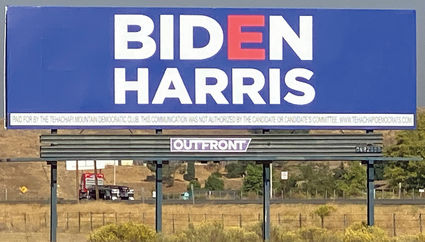 Through much of this year's presidential campaign it has seemed like Tehachapi was a one-party town, with only one candidate being supported. That has now changed. Anyone driving westbound on Hwy. 58 between the East Tehachapi Blvd. and Mill Street exits will see a bold new billboard stating "Biden/Harris." As of this writing, it is the only one in Kern County.

The billboard was the idea of a group of local residents who were talking with each other online about how frustrated they were with seeing nothing but the other candidate being represented in the Tehachapi area. They wanted to find a way to visually "go big" to show how much support there is here for the Biden/Harris ticket. One idea was to put up a billboard somewhere in town, and it was floated on social media to see what other people thought.

Support for this project was immediate and enthusiastic. One person volunteered to research possible locations. Generous donations were quickly pledged, not only from local Democrats, but also Independents, Green Party members and even some "Republicans for Biden." The Tehachapi Mountain Democratic Club came on board and endorsed the project, as well as other ideas, such as rallies and yard signs.

Funding grew beyond the amount needed for the billboard. The idea to use the extra donations for yard signs and print advertising to promote Democratic candidates was acceptable to all donors. All agreed that any funds left over will be donated to the Biden/Harris and Mangone for Congress campaigns.

As the informal group of local citizens grew, they also decided to make their voices heard by staging two rallies. The first took place on September 20 at the corner of Tucker and Valley Blvd. (Hwy. 202), and included Kim Mangone, who is running for Congress to unseat Kevin McCarthy. The second is planned for Sunday, October 18, from noon to 2 p.m. Participants are encouraged to bring friends, posters, signs, American flags and "a winning spirit," according to the organizers. People are also expected to wear masks and practice social distancing at the rally in the interest of safety.

As one of the campaign organizers expressed it, "We are all Americans who love our country, who proudly fly our American flag. We all must unite to make changes for a better America in the coming years."

The growth of this grass-roots movement is evidence of the power of social media to connect like-minded people who might be hesitant to express their views outwardly in today's political climate. The organizers stress that people unhappy with the state of affairs in our country today don't have to feel alone, especially in their own hometown. They are urging everyone to vote on or by November 3, in person or by mail.

With the "go big" campaign, those who are now a part of this movement have officially declared that it is time the supporters of Biden/Harris in this community step up, shout out and join together to work for a better America.

Clearly, to these citizens, Tehachapi should no longer be considered a one-party town.