On Friday, September 25, supporters of President Trump's re-election conducted the third rally in Tehachapi since late July. As the election has heated up, so has interest in our rallies: the July rally attracting 200 plus folks, the August rally 400 to 500, and at the recent September rally 800 to 1000. Rally-goer Wilbur W. Wells was quoted in the Tehachapi News observing, "There were literally hundreds of American flags present, and not a single one was burned or disrespected. Instead, people from all walks of life were happy, smiling, cheering, civil and enjoying themselves immensely. This is the America I want to live in. God Bless America!"

In addition to Tehachapi residents, participants in the September rally came from far and wide to show their support for our president. We had folks from Bakersfield, North Edwards, Edwards AFB, Rosamond, Lancaster and even as far away as Santa Clarita (not exactly a "hotbed" of Republican support!). An equestrian from Bakersfield, Lori Ann Wiley, even trailered her horse up and circled the crowd holding the American flag. As Mr. Wells rightly noted above, the event was indeed characterized by a collective sense of joy, civility and unity. We congregated at all four corners of the intersection of Tucker Road and Valley Blvd., our lines stretching far down Tucker Road in both directions and even reaching all the way up to Save Mart. And while we waved our flags and lifted up our signs (many of them supporting law enforcement) an unremitting stream of cars and trucks rolled by, honking their horns and hoisting their U.S. or Trump 2020 flags in approval.

The rally was given a big boost by "Tipsy Wagon" and Goodfellas Mobile Detailing, both of whom provided food and drink, while "DJ Drew" kept everyone's spirits aloft by blaring country and rock music from his music system's powerful speakers. We all got a kick out of Ricky Rebel's "MAGA YMCA," a clever adaptation of the Village People's ever popular "YMCA" hit tune. I, for one, cannot recall the last time I danced so much! Let me also give a big "shout out" to Rick Torres of RST Cranes, who once again lifted a giant American flag above our rally site. Of course, we are also grateful for the presence of the Tehachapi Police Department, our local CHP officers and the Sheriff's Department. Finally, I would be remiss if I did not thank freelance photographer Nick Smirnoff and his discerning eye for the fine photographs he snapped of the rally.

Our next rally is planned for Saturday, October 17, from 3 to 6 p.m. at the same location, the intersection of Tucker Road and Valley Blvd. If you support the president, please join us!

All of America is now aware that both President Trump and First Lady Melania have been diagnosed with COVID-19. I hope that, despite our often bitter political differences, we can come together in recognition of our common humanity and pray for a rapid and complete recovery for both the president and the first lady. 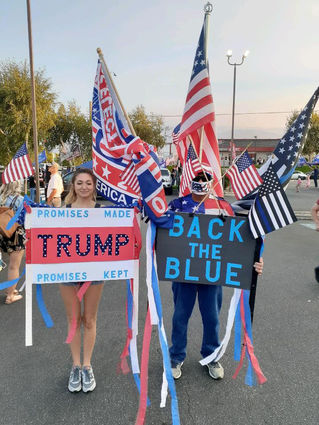