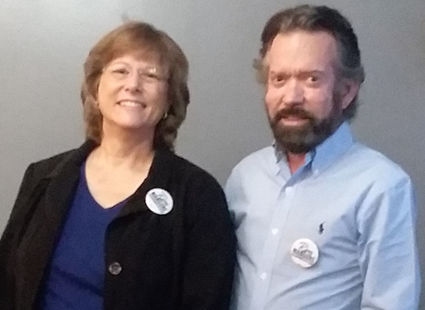 Kim Mangone, candidate for 23rd Congressional District, spoke at the September virtual meeting of the Tehachapi Mountain Democratic Club. She told the Club she is running for Congress because she believes we need a representative who will fight for the people in our District.

As a single working mom, Mangone went to college and earned a Bachelor Degree in Professional Aeronautics and became a Systems Engineer. She feels this work experience gave her the skills to find and solve problems, a skill she will apply to problems in the 23rd Congressional District.

Mangone is concerned about the economy in this District. "We need to bring good paying jobs to our District. This includes investing in our infrastructure and community needs," she told the group. She noted the 17 percent unemployment figure in the District is an absolutely unacceptable number.

Mangone served in the United States Air Force for six years, first as an aircraft mechanic and later as a flight engineer. She understands the challenges faced by active duty military and their families, and veterans like herself

Mangone feels she can represent the people of CD 23 better than Kevin McCarthy who has held the position since 2007. She will use her skill and experience to understand constituent needs. She promised to go to Washington and fight to enact solutions to help this District.

The next meeting of the Club will feature discussion of some of the initiatives on the November ballot. The website for the club has information and membership application forms. It may be accessed at tehachapidemocrats.com.