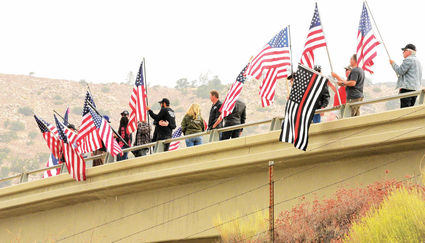 On Sept. 11 2020 the victims and heroes of 9/11 were honored throughout the City Of Tehachapi under the guidance of the national Wreaths Across America organization. Nearly three dozen flag-waving veterans and community members lined both sides of the Dennison Rd. freeway overpass. With the sound of blowing horns, nearly every vehicle and truck passing below acknowledged the significance of this patriotic memorial. U.S. Army veteran Jim Jacobs stood proudly and explained the nation's need for remembering the events that took place on this date 19 years ago. 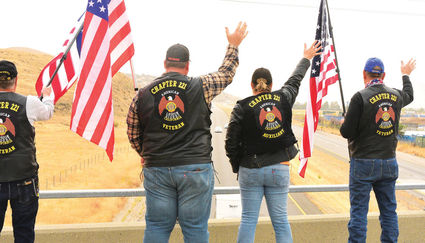 Earlier in the day, a group gathered at the veterans memorial at Cub Lake in Bear Valley Springs where a patriotic flag raising ceremony was conducted by the Bear Valley Springs veterans Association Honor Guard. A full minute of silence was twice led by Jacobs, who asked everyone to stand tall and silent, at both 8:46 a.m. and again at 9:03 a.m. These times represented the moments when each of the twin towers of the World Trade Center in New York was struck by an airplane on 9/11/2001. Not to be forgotten on that occasion is the plane that struck the Pentagon and the plane with the heroes aboard that crashed in a rural Pennsylvania field.