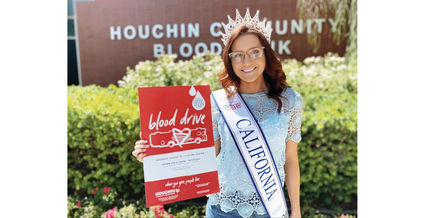 One of our favorite local beauty queens, Tiffany Rea, has captured yet another title and was crowned Miss California United States on Aug. 9. The pageant was held in Santa Clarita at California Institute of the Arts. The Miss United States pageant is open to young, never-married women between the ages of 20 and 29 and is not to be confused with Miss USA, Miss America or Miss United States International. Miss Rea says she was attracted to this particular pageant due to its emphasis on community service. The pageant, "prides itself in providing an avenue for each young woman to give a voice to those needing to be heard, [and] lend a hand to those less fortunate."

Rea, now 23, also won Top Interview out of 24 participants. The interviews are held individually in front of four judges and involve answering questions with an emphasis on the candidate's platform. Miss Rea's platform is promoting volunteerism through mentorship. Her focus is not on one particular age group but embraces people of all ages and from all walks of life. When mentoring pageant girls she teaches them how to develop their own platforms and give back to their communities.

Rea explained that the pageant was unlike any in which she has ever been involved because of the COVID-19 precautions. The pageant director did a great job of providing masks and promoting social distancing. Only a small number of young women were allowed in the dressing rooms at one time and only one guest was allowed in the audience. Rea's mother watched in the auditorium while her father had to wait outside, although her father was allowed to come inside once Miss Rea was crowned. The participants wore masks and social distanced any time they were not on stage and, of course, they were onstage alone. The pageant events included an interview, swimsuit contest and evening gown contest. Participants also fielded questions when they were onstage during the evening gown competition.

Other systems such as the Miss America and Miss USA pageants have been canceled and/or postponed indefinitely, however, the United States National Pageants organization has been officially cleared for its 34th Annual National Pageant Week. This year's theme is "Reach for the STARS."

Rea has added online and internet safety to her platform. She has recently become an advocate in the fight against human trafficking through Operation Underground Railroad. The FBI has identified human trafficking as the fastest growing criminal activity globally. She has participated in online training to recognize the signs of trafficking through Operation Underground Railroad and will be developing her own courses to help teach others.

Additionally, Rea has been partnering with Houchin Community Blood Bank to host blood drives. The next drive hosted by Rea and her mom, "Crown for a Cause," is scheduled for Aug. 29 at TK's Pizza, 640 W. Tehachapi Blvd., from 11 a.m. to 2 p.m.

Rea has also started a social media initiative on Facebook called Motivation Movement to promote positivity during this difficult time by sharing what people can do from home to lift spirits and help their community.

Miss Rea has accomplished all of the above, and more, while working parttime for the City of Tehachapi and being enrolled as a full time student with Liberty University online, studying to get her bachelor's degree in Criminal Justice: Crime Scene Investigation, with a minor in Psychology.

In the words of Ralph Waldo Emerson, "The purpose of life is not to be happy. It is to be useful, to be honorable, to be compassionate, to have it make some difference that you have lived and lived well."