The best pilot I have ever known 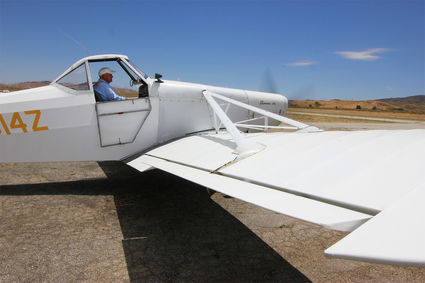 I have been around aviation since 1983, when I took lessons to fly sailplanes in Tehachapi at the former Fantasy Haven Gliderport, which is today known as Mountain Valley Airport. One of the incentives to get me up to 4,000 feet was to learn to fly and work in Kern County.

I have been lucky to have had some great flight instructors and to have been around so many good pilots and I have learned from each of them. One pilot in particular, who towed us up in the gliders, made a big impression on me and on many other young pilots.

His name was Ken Patton, a former Edwards Air Force Base fire fighter. He had fantastic experience from being around during the heyday of flight testing at Edwards in the 1960s. He was involved in many famous projects standing by just in case he was needed. In flight testing high performance jet aircraft anything can happen. Talking with Ken it was clear that he was not always just standing by. I would like to say thank God for all of our first responders like Ken. God bless them all.

Ken Patton's experience as a great fire fighter combined with his vast aviation background made him a fantastic pilot and tow pilot for gliders.

I had the opportunity many times to fly with Ken in a high performance ASK 21 sailplane. At this time Ken did not have a glider rating but he flew the sailplane like he had thousands of hours logged in sailplanes. Ken was very coordinated with his use of the controls and I was always blown away by how smooth he was with the controls; there was something very special about his flying skills. I tried to learn all I could from him by observing him, talking to him about what he was doing and trying to understand his thought processes.

Ken Patton was a natural born pilot. Flying came easy to him and that made him safe in the air. He had fantastic situational awareness which enabled him to multitask, like scanning for other air traffic. It was like seeing a world class guitar player playing a classical song with ease; one with the music, one with the guitar. This was the same with Ken and his flying.

Ken could see things before I could in the sailplane. He would make an aggressive banking maneuver. I would not be sure why, then I would see that it was due to air traffic Ken had noticed before I had.

I got to do most of my flying with Ken Patton and I feel very blessed to have flown and learned from him over the many years. Ken passed on a few years ago and he is very missed by all that knew him. I feel I am a safer pilot and a better person for having known him. Ken had many funny sayings that stay with me. I will close with one of them, "It's neither fish nor fowl." As always, Ken was really talking about airplanes and aviation in one way or another. What he meant was if you buy an aircraft, buy a certificated aircraft. Don't buy any underpowered ultralight; get a real aircraft that can fly in the winds, like in the Tehachapi Mountains.

Ken was a very smart, well educated man and the best pilot I have ever known.