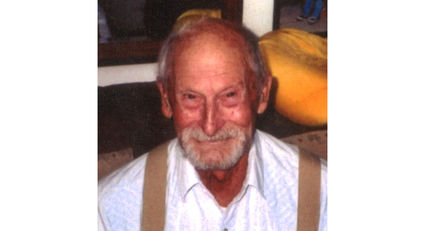 Ramon Edward Burgeis was welcomed home by his Lord and Savior on August 13, 2020.

A longtime resident of the Tehachapi, California community, Ramon moved with his family from Oregon to Tehachapi in 1929 at two years of age. He attended the local schools until he was bitten by the "cowboy bug" and started working at the Broome Ranch. He later went to work for the Monolith Portland Cement Company. After 30 years with Monolith, he retired from the company.

During his short career in the United States Navy, Ramon served at Camp Peary in Virginia. He was honorably discharged as an Apprentice Seaman.

Ramon married Ruth in 1948 and had two children, Linda and Billy. After Ruth passed, Ramon reunited with his childhood friend, Pauline. They were wed in 1993 and he gained three beloved stepchildren.

Ramon was always there for his friends and family. He was preceded in passing by his parents, Lila and Donald Burgeis; sister, Donna Scott; and brother, Bobby Burgeis. He is survived by his daughter, Linda Vaughn; son, Billy Burgeis; sister, Mary Lou Yearton; stepchildren, Sharon Jacobs, Ila Walker O'Connor, and Roger Walker; and many grandchildren, great-grandchildren, nieces and nephews.

Ramon will be privately laid to rest at Tehachapi Public Cemetery-Eastside, 820 Burnett Road, Tehachapi, CA 93561. Funeral arrangements are entrusted to the care of Wood Family Funeral Service in Tehachapi. Condolences can be made online at http://www.woodmortuary.net.