The legacy of a simple man 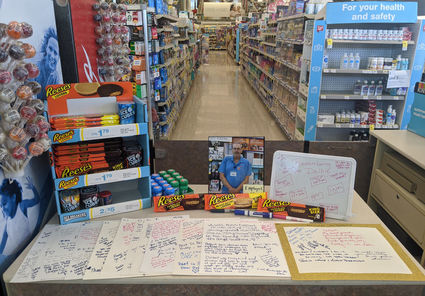 How heartwarming and sweet that the passing of a simple man who led an uncomplicated life has touched the hearts and lives of our community in such a profound way.

In the words of his son, Michael, and as cited in his obituary, Delbert Hill was a "work, home and church guy." Best known in his most recent employment at Walgreens ("the face of Walgreens Tehachapi"), Delbert was always upbeat and positive and had a unique knack for making people feel special, calling his customers by name and showing a sincere interest in them and their lives. Michael says that the outpouring of sentiment for his father from our community has been overwhelming.

Walgreens has set up a beautiful memorial to Delbert on one of the sales counters with sheets of paper for personal condolence notes. The memorial also features several Reese's Peanut Butter Cups, Delbert's favorite snack, for which he received much good-natured ribbing from fellow employees.

In June, Delbert, Michael and Delbert's sister, Patsy, who all lived together, tested positive for COVID-19. Delbert manifested symptoms a few days before Michael, yet Michael was very sick for about two weeks. According to Michael, his father was asthmatic, had respiratory issues and was a Type 2 Diabetic. His viral symptoms quickly developed into double pneumonia. Delbert ended up in the Adventist Health Tehachapi Valley Hospital and was admitted into the ICU; however, he soon began to experience renal failure and, needing dialysis, was medevaced to San Joaquin Hospital. During Delbert's stay in the ICU in Tehachapi, hospital staff had a very difficult time regulating his oxygen levels, which adversely affected his organs. He suffered several cardiac arrest events, two in the helicopter on the trip to San Joaquin Hospital in Bakersfield. His organs were shutting down and he was ultimately taken off life support after Michael and his aunt, Patsy, were able to see him one last time. Delbert was only 58 years old at the time of his passing.

Born in Tennessee in 1961, when he was very young, his family moved to the greater Los Angeles area, settling in Carson. He moved to Tehachapi in 1991 or 1992 after his parents moved to the area. An extended family of cousins, aunts and uncles also lived in the Tehachapi area during the early 1990s. Delbert struggled with drug addiction during those years and Michael says it is probable that he moved to Tehachapi to be close to a supportive family.

Shortly after moving to Tehachapi, Delbert met his future wife, married, and Michael was born in 1996. He was raised with his half sister, Jennifer, who is nine years older. Much to his credit, Delbert raised Jennifer as his natural daughter, and Michael and Jennifer are very close despite their age difference.

Delbert described his overcoming addiction as a "God thing." He was a devout Christian and a member of the Summit Christian Fellowship for decades. He was reputed to be a fantastic singer and guitar player, and was a member of the Church worship team. After coming clean from his drug addiction, Delbert's faith was central to his life. He openly acknowledged that if it were not for his making Christ the focus of his life, he would have been a completely different person and not necessarily a person of whom he could be proud. He was always sharing his faith with others and as his son Michael indicated, Delbert would want to use the opportunity of his passing as a final occasion for evangelizing. 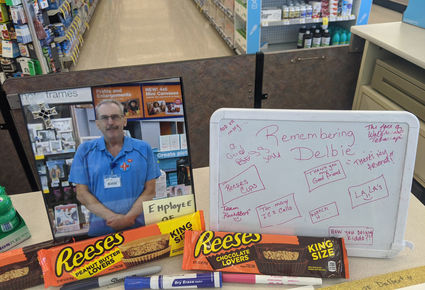 Delbert performed janitorial work at the Hitching Post Theater as one of his first jobs in Tehachapi. Michael commented that it seems as if his entire family has worked at the Hitching Post Theater and it was also his first job. Delbert later worked at Domino's Pizza, which allowed him the flexibility to manage Michael's school schedule. He spent the last eight years employed at Walgreens.

While known to his friends and family as an introspective and quiet man, Delbert had a major impact on the Tehachapi community. He will be sorely missed.

Delbert's Celebration of Life can be found on page 11 of this issue.