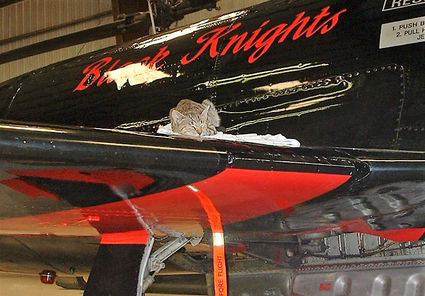 Tabby kitten on wing of CT-133 in hangar at Mojave Airport.

My life is full of kitty cats and airplanes! Since my son Douglas passed away, I have been taking care of all of his kitties in the house, plus all of the feral cats that depended on him. I am overrun with kittens and they are all adorable. Of course they are! They're kittens!

My husband Al and I have always had cats at the hangar too and they were always a big help when working on the airplanes. Ha! I couldn't resist taking a picture of this little Tabby Cat on the wing of Al's new CT-133 painted up like the Black Knights. We had just finished wiping it down and had this little helper.

Back in 2004, Al, bought a beautiful two-seat CT-133, a Canadian T-Bird. This aircraft type was originally built by Lockheed as a T-33 trainer in the U.S. and was a derivative of America's first successful jet fighter, the Lockheed P-80 Shooting Star. It had belonged to the late Dr. Dam Lavigna.

In the early 1950s American T-33s were loaned to the RCAF for training service in the Canadian Air Force. From 1952 to 1959, Canadair contracted with Lockheed to build 656 CT-133 Silver Stars. The Canadair CT-133 aircraft had a larger, British designed, Rolls Royce Nene 10 turbojet engine. The American version was powered with an Allison J-33 with 5,200 pounds of thrust.

The T-33 is a P-80 with the fuselage lengthened three-feet to accommodate the second seat for training purposes. Originally designated the TF-80C, the T-33 made its first flight in March 1948. Production continued until August 1959 and 5,691 T-33s were built. Engineers were surprised to discover that the T-33 was actually faster than the P-80!

The T-33 is one of the world's best known aircraft, having served with the air forces of more than 20 different countries for nearly 60 years.

In the mid-1990s, the Silver Star fleet in Canada underwent a $12-million upgrade. Of the 45 CT-133s re-delivered to the Canadian Air Force in 1998, 10 were equipped for the Electronic Warfare (EW) role. The EW trainers performed threat simulation by mimicking the emissions and flight path of hostile aircraft or missiles.

The modified ET-133s, as they were known, emitted microwave radiation equivalent to the radar signals of an attacker.  These EW training aircraft also had under-wing stores pylons wired to carry jamming pods to disrupt communications and chaff dispensers to confuse radar signals.

Al's CT-133 has the pylons mounted on the hard points under the wings, but the wiring for jamming pods has been removed. (Hard points could be used for flight test work though!) 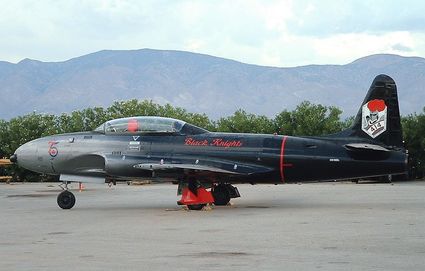 His airplane has a neat paint job and commemorates the 75th Anniversary of the RCAF 414 "Black Knights" Combat Support Squadron, based at 19 Wing Comox.

The T-Bird is the longest serving aircraft in the Canadian Forces. It has close to 55 years of service and 2.4 million flight hours. It began service as an advanced jet trainer for the Royal Canadian Air Force, and was later used as a ground attack aircraft for peacetime training. The final era of the T-33 had it employed as both a combat support and test aircraft with the Engineering Test Establishment in Cold Lake, Alberta, until it was withdrawn from service on March 31, 2005.

This T-Bird was sold shortly after these photos were taken, but the memories of the helpful kitties always brings a smile to my face.