Jack Sprague and his tireless efforts to document rock art 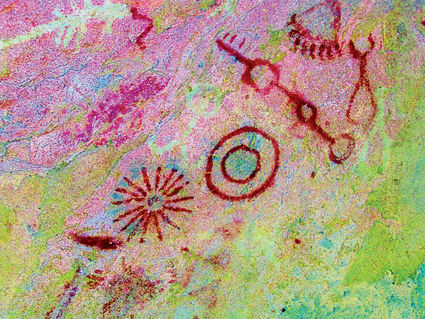 This image of pictographs in the Sand Canyon area has been enhanced using DStretch technology to bring out faint design elements.

When Jack Sprague was 7 years old, he and his dog got caught in a downpour in a portion of Sand Canyon at the eastern end of the Tehachapi Valley, and together they sat out the rainstorm inside a rock shelter that bore numerous ancient Kawaiisu (Nuwä) Indian pictographs painted on the ceiling. The boy and his dog spent a couple of hours in the shallow cave. Jack never forgot the experience and the impression it made on him. That was in 1966, and Jack grew up to have an abiding fascination with rock art – he has recorded more than 50 different rock art locations within Kern County, making him one of the leading contributors to the archaeological data base in the county.

Jack spent much of his professional career as a field engineer and later regional and area manager for Westinghouse CCD and its successor, Emerson Electric, before taking an early retirement in 2006. He then turned his avocation into a vocation, becoming a staff archeologist with Pacific Legacy Inc. in 2009. Few people have spent as much time as Jack has studying and documenting Kern County rock art over the past 30 years. His wife, Gale Grasse-Sprague, is a retired archeologist in her own right, and together this Stallion Springs couple has amassed a considerable amount of archeological experience.

It was not entirely random chance that Jack happened to be in an area rich with Native American cultural significance on that rainy afternoon in 1966. Jack's stepfather and a neighboring rancher actually went out to pull Judy Barras' Jeep out of the mud. Judy, who passed away a couple of years ago, was a Tehachapi resident who wrote several books about Tehachapi history and was very interested in Native California culture. She was exploring Sand Canyon when the Jeep got stuck.

Rather than keep young Jack and his dog with them, his stepfather and the rancher left Jack right at a level area at the site of the rock art cave, with his stepfather admonishing him NOT to cross the small seasonal creek (Cache Creek) or enter the rock shelter on the other side of the creek. After the two men drove away, of course, Jack both crossed Cache Creek and went into the cave. It was there that he and his dog weathered the downpour, which quickly swelled Cache Creek and rendered it impassable. Jack stayed hunkered down in the rock shelter as his stepfather drove back and forth looking for him, and when the creek subsided and Jack was able to cross back over it, he found a spanking waiting for him for disobeying his stepfather. His interest in rock art grew, however, and when he was about 25 years old he began actively seeking out pictograph sites.

"I have the locations of more than 235 rock art sites in Kern County, about 50 of which I recorded myself," Jack explains. "I didn't find them all, but I consulted old documents from previous rock art researchers, which had been stored at Cal State Bakersfield and the Santa Barbara Museum of Natural History, and I visited, photographed and officially recorded the sites, which had never been done before at many of the sites."

Jack has held every board position at the Kern County Archeological Society at least once, and has been active in the American Rock Art Research Association.

Jack is frequently asked about the meaning of the ancient paintings, and he is quick to point out that the exact significance to the original artist cannot be determined.

"There's no way to know for certain what the different symbols meant to the people who painted them, because those individuals have been gone for hundreds if not thousands of years, but researchers can make educated guesses," Jack said. "I'm more on the conservation and preservation end of rock art. I frequently work with Native American site monitors and have great respect for the cultural significance of these sites. Even in the 30 years that I've been doing this, I've seen rock art be diminished – by vandalism, cattle rubbing, even by a bear licking the mineral salt that formed on a rock surface because of a seep near pictographs. These are perishable works of art, particularly those that are fully exposed to the elements, and we need to identify and photograph them now so that future researchers will have the opportunity to interpret them."

Jack originally made transparencies (slides) of rock art sites, but in more recent years made the switch to digital photography. He also makes use of an incredible technology called DStretch which was developed by mathematician Jon Harman. DStretch is a useful tool for archaeologists involved in the study and documentation of rock art, because its enhancement techniques can bring out very faint pictographs almost invisible to the eye. Jack can take a photo of a dim or faded pictograph and use DStretch to dramatically bring out the design elements, as evidenced by some of the photos that accompany this story. NASA has used DStretch technology to enhance images produced by the Mars Rover, and while the bright colors certainly can't be mistaken for the pigments in an actual photograph, DStretch can reveal designs that are imperceptible to the naked eye.

"In addition to trying to conserve and protect rock art sites, I photograph them so that we can continue to build up the element inventory – such as concentric circles, anthropomorphs, spoked wheels and other designs – so that researchers of rock art will have a bigger body of work to study and attempt to draw conclusions from," Jack said. "All of my records are turned over to Cal State Bakersfield and confidentially held, so that researchers have access to them but potential vandals and thieves do not." 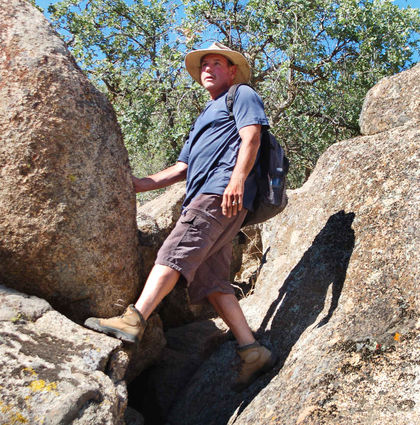 Archeologist Jack Sprague has been one of the leading documenters of rock art sites in Kern County.

As a favor to his friend Harold Williams, Jack was largely responsible for the rock art chapter in the Handbook of the Kawaiisu.

Jack Sprague has come a long way from the little boy waiting out a Tehachapi Mountain downpour in a shelter with pictographs, but his passion for studying and conserving rock art has only grown in the ensuing years.