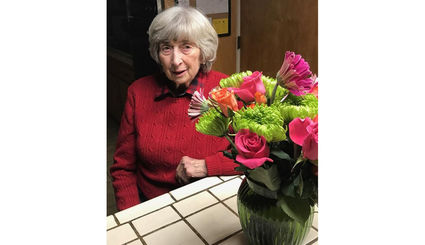 Marilyn was born in Santa Monica, Calif. to parents Earl G. Boward and Mary Erlene Thomas Boward and lived in Venice, Calif. At the age of 8, her family moved to Lewistown, Mont. where they had purchased a greenhouse and flower business. She graduated from Fergus County High School in Lewistown in 1956 where her activities included band, choral groups and cheerleading. A Kappa Kappa Gamma Sorority member, she graduated from the University of Montana in Missoula in 1960 with a degree in Social Services and worked for the Campfire Girls Organization in Des Moines, IA for two years. She then returned to the University of Montana to get an Education Degree and was recruited by the Lancaster School District in California to teach seventh grade in 1964. Buzz, who worked at the Air Force Rocket Propulsion Laboratory at Edwards AFB, met Marilyn through the Antelope Valley Ski Club, and they were subsequently married in the Malibu Methodist Church in Malibu, Calif. on Aug. 6, 1966.

In 1972, Marilyn and Buzz moved to Tehachapi where Marilyn taught grades fourth-sixth in the Tehachapi Unified School District before retiring in 1994. Buzz retired from Air Force Civil Service in 1995, and they traveled extensively up until 2019 when she became ill. Marilyn pursued many activities in Tehachapi including the Summit Singers, the Tehachapi High School Band Boosters, the American Cancer Society Relay for Life (Co-Chair in 2007), the Horse Thief Women's Golf Club and the Tehachapi Depot Museum. She became the unofficial Daffodil Queen of Tehachapi by organizing a project to beautify the city by planting over 31,000 daffodils around town. She was also a member of the Good Shephard Lutheran Church of Tehachapi. Marilyn touched thousands of lives through 22 years of teaching and civic activities and is remembered by all for her kindness and ability to see the good in everyone she met. In lieu of flowers, the family asks anyone who wants to honor Marilyn's memory to do so with a contribution to the American Cancer Society in her name.

Funeral arrangements are entrusted to the care of Wood Family Funeral Service in Tehachapi, Calif. Condolences can be made online at http://www.woodmortuary.net.