As with most celebrations these days, the event was delayed a few months due to the COVID-19 pandemic. Several chaplains and other military personnel who served with Father Clare over the years as well as members of his congregation and assorted friends and family attended and enjoyed a delicious tri-tip and chicken dinner. Military personnel hailed from locations throughout California and are as follows: Ch. (Maj.) Clayton Diltz, Major General Clay Garrison, Ch. (Maj.) Saul Castillo, Ch. (Col.) Rick Blank, Ch. (Lt. Col.) John Love, Ch. (Col.) Christopher M. Fowler, Ch. (Col.) Les Hyder (ret), SSgt. Geoff Lee, SGM Desmond Knight and Sr. A Stewart Shavinsky.

Chaplain (Maj.) Clayton Diltz officiated and did a magnificent job of interspersing the realities of Father Clare's military career with humor revealing the history of an extraordinary and humble man. He commended St. Jude's congregation for prevailing throughout Father Clare's frequent absences. He also recognized the strain on the Clare family which is similar for every military family and acknowledged that Father Clare could not have been so successful had his wife and family not been so supportive, loving and compassionate during his frequent departures and absences for extended periods.

Father Clare, then simply Wesley Clare, met his wife, Wendy, in 1981 in church choir where she sang as a soprano and he as a baritone. He affectionately says that they irritated each other for the first four years of their acquaintance and admitted to being rather obnoxious. However, shortly after he entered the Air Force, they began courting and three years later were married July 1, 1989. Family folklore relates that Wendy fell in love with Wes upon seeing him in his military uniform and Wes knew Wendy was the one for him when he discovered that she drove a 1972 Chevelle muscle car, which the family still possesses.

Father Clare began his career in the military in 1985 at Mather AFB in Sacramento training as an aircraft navigator. He had previously graduated from The Evergreen State College in Washington State with a Bachelor of Science in Computer Science.

He was deployed to the Middle East to participate in Operation Desert Storm in the winter of 1991 as a navigator/electronic warfare officer on a B-52 bomber, protecting the plane from enemy defenses. Electronic warfare officers are aerial navigators who are specialists in finding, identifying and countering air defense systems and also radar, infrared and optically guided surface-to-air missiles, anti-aircraft artillery as well as enemy fighter planes. Father Clare flew 25 missions over Iraq, among them bombing Iraq's Republican Guard Headquarters in Kuwait, several airfields and a Taji military base in Iraq.

Father Clare spent the year following his return from Operation Desert Storm as a tactics instructor before hanging up his wings to attend seminary in 1992. By the time he left the Air Force, Father Clare had logged 129 combat hours. When asked why he chose to become a priest, Father Clare responded that almost every important adult in his life had been encouraging him for some time to go to seminary, however, when his wife also urged him, it was a "done deal."

Evidently, at the time Father Clare resigned from active duty, the military was encouraging personnel to resign from military service as the Cold War had just ended in 1991. He was given a severance package to cover the cost of seminary. Three years later Father Clare had completed a Masters of Divinity at Trinity School for Ministry in Pennsylvania. He worked for a year in Pittsburgh as an automotive technician to support his family before being ordained in 1996, then served his first parish in Wyoming and later assisted a bishop in North Dakota, while also working as an auto technician in 2001.

In 2002 he was selected as a full time parochial priest in Tehachapi at St. Jude's. It was a good fit for both the parish and Father Clare as he could "speak airplane" and cars as Tehachapi is home to many active and retired military and civilians employed at Edwards AFB and in the local aerospace industry. During that same year, he joined the National Guard Chaplain Corps in response to the need for chaplains after September 11, 2001 where he served until his retirement on March 1, 2020.

In 2005, Father Clare joined the 144th Air Fighter Wing and was almost immediately sent to New Orleans working as one of the first chaplains sent to minister to Katrina hurricane victims. He remained there several weeks living in rather difficult circumstances. Interestingly, during this assignment he had a dual designation as an Army Chaplain as he was additionally embedded as a battalion chaplain with the 1/144th Field Artillery Battalion.

In 2008, Father Clare was installed as the Wing Chaplain of the 144th Fighter Wing and that same year was trained as the primary chaplain for the California CBRNE Enhanced Response Force Package. The latter assignment involved him traveling approximately 350 miles per month, managing pastoral care for the entire Wing of over 1,100 personnel, and training the chaplain corps of that wing.

From January through May 2009, during the "surge" in Iraq (Operation Iraqi Freedom), he was deployed to serve the 332nd Air Expeditionary Wing at Joint Base Balad, providing pastoral care for wounded warriors awaiting transport from the theater hospital to the US hospital at Landstuhl, Germany. He mentioned that some soldiers were so grievously wounded that all he could do was administer rites before they flew from Iraq and they would later expire after arriving at the hospital in Germany. This was Fr. Clare's "sabbatical year" and an interim priest led his congregation until his return.

In 2013, the Adjutant General asked him to be the state chaplain managing the entire state Chaplain Corps of over 120 personnel, the largest in the nation. His duties included training the chaplains in mass casualty disaster operations, including wildfires. He was responsible for their deployment readiness as well. Under his leadership the California military suicide rate was reduced to the lowest in the nation. In 2020 thus far there have been no suicides and in 2019 there was only one suicide out of 23,000 California military personnel – truly an amazing feat.

From 2015 to 2018, Father Clare continued his assignment for the state but resigned his position with the 144th Fighter Wing to become the Air National Guard Assistant to the Command Chaplain of North American Aerospace Defense Command (NORAD)/US Northern Command. In this position he was responsible for helping manage Chaplain Corps support for all federal domestic disasters, including Hurricanes Harvey and Maria, any large scale disaster, and active duty support, making sure massive mobilizations had enough chaplain support. This, with his state job, involved his being on the road 160 days a year.

Coincidentally, in 2015, St. Jude's congregation was exiled from their church on Curry St. in Tehachapi. Father Clare stated that had it not been for the generosity and support of Mountain Bible Church allowing them to rent space in their hall, the congregation would have disbanded. A Deacon and active lay ministry filled in during Father Clare's frequent absences. Father Clare commended the congregation for carrying on the church ministries during his absence, ministering to the elderly, the sick, homebound and continuing the Life Skills Ministry, which assists the disadvantaged gain life skills to allow them to build better and more successful lives.

Providentially, the vacant church building on Curry St. was purchased in 2019 by a kind investor, who rents to the St. Jude congregation. The return to the original church has allowed the congregation to thrive and grow again.

Father Wes also continues to serve as a chaplain for the Kern County Sheriff's Dept., a volunteer position, which offers mutual support for the Tehachapi Police Dept.

During the retirement ceremony, Father Clare was awarded several Certificates of Appreciation. Major General Clay Garrison, with whom Father Clare had served for 15 years, presented a Certificate from President Trump and another from L. Scott Rice, Director of the National Guard. Major General Garrison remarked that Father Clare handled catastrophe better than anyone he knew and added that "Wes is a gem." According to Garrison, Father Clare followed through crises until handled and if he felt he was not effective, he found someone who could be. Major General Garrison stated that it is difficult to get chaplains to join the military. Many think it is incompatible with being church leaders. Many people also do not understand that a chaplain has two distinct job titles and responsibilities, one being spiritual ministry and the other as a military officer. With Father Clare, Major General Garrison knew that he always had a prayer warrior by his side. Chaplain Colonel Fowler emphasized that quality in Father Clare also, saying that the core of leadership is ministering to the heart. Father Clare was there "when the rubber meets the road." 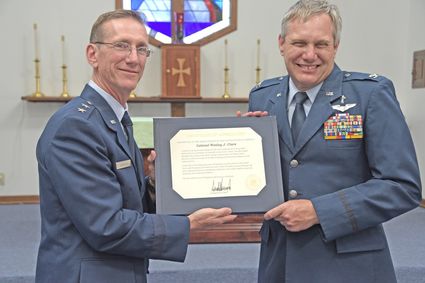 One of several certificates, gifts and honors, presented to Chaplain Colonel Wes Clare at his retirement celebration. Presenting this Certificate of Appreciation from President Trump is Major General Clay Garrison.

Sergeant Major Desmond Knight, a Religious Affairs NCO with whom Father Clare had also served for several years, presented a plaque remarking, among other sentiments, that a true friend walks in when everyone else walks out, indicating Father Clare was that kind of man. Father Clare was generally acknowledged by all who know him and had served with him as being an extraordinarily humble and obedient man with a true servant's heart.

Among those who spoke, the Clares' third child, Hannah, spoke about how people generally do not understand what her father does and all of the sacrifices he endures. His family are his cheerleaders and his support crew.

Although now officially retired from the military, Father Clare serves his parish and has sufficient projects to occupy his time. Interestingly, his is one of the few churches offering a vehicle ministry. He and parishioners who are adept at car repair volunteer their services to do small to very large repairs on vehicles belonging to single moms and others of slender means.

Coming away from this retirement ceremony, one is struck by what a remarkable person is Father Clare, something one would never know given his humble demeanor. Our small town is so lucky to have a person of this caliber residing and ministering here.