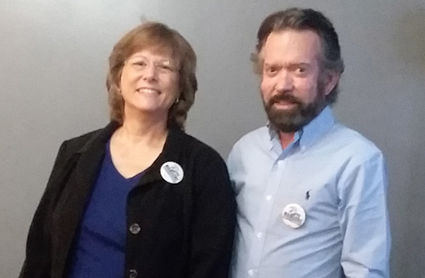 We need to bring good paying jobs to our district. This includes investing in our infrastructure and community. This is just one of the issues Kim Mangone is promoting as she campaigns to be elected to represent the 23rd U.S. Congressional District. She spoke on a Zoom meeting of Tehachapi Mountain Democratic Club recently.

Mangone told the Club, "I am a Democratic candidate running for Congress in California's 23rd District because I believe we need a representative who will fight for the people in our district. My life experiences include being a USAF Veteran, an aircraft mechanic, a systems engineer and a single working mom. While working full time, I went to college and earned my bachelor's degree in Professional Aeronautics. My time spent as a systems engineer has provided me with the skills needed to not only identify but to find solutions to the problems and challenges in our district."

Kim faces formidable candidate Kevin McCarthy in November, but if enough Democrats vote in November, she can defeat the longtime incumbent. He has served in this position since 2007.

Tehachapi Mountain Democratic Club usually does not have general meetings during July and August. They hope to gather at their annual summer picnic, but need to make this decision according to rules regarding group gatherings during the COVID-19 crisis.

Dues for joining the club are now payable. They are $20 and may be sent to Tehachapi Democratic Club, P.O. Box 428, Tehachapi, CA 93581. The website for the club has more information and membership application forms. It may be accessed at http://www.tehachapidemocrats.com.