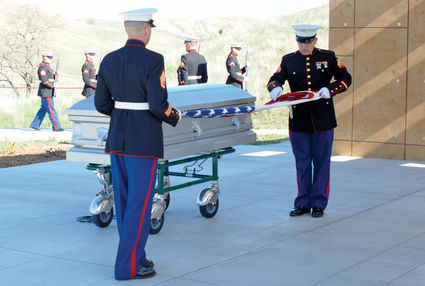 An American flag is carefully folded during the services for Tehachapi native Bob Freeman, a World War II vet.

Moments after the last notes of "Taps" fade away from a lone bugler, you can hear the "ka-KER-ker" calling of nearby California quail. Two men in spotless military uniforms remove the American flag from a silver casket, triangle-fold it, and present it to a grieving relative. The honor guard is dismissed. From the lower branches of a big valley oak, the liquid warble of a meadowlark drifts upward. Another funeral service has ended at Bakersfield National Cemetery, tucked serenely into the rolling foothills of the Tehachapi Mountains.

This sacred place, located on 500 acres donated by the Tejon Ranch Company, is about 15 miles northwest of Tehachapi and 20 miles southeast of Bakersfield, near the junction of Highway 58 and Highway 223. It is a beautiful setting in an area known to locals as White Wolf, after at least one pack of pale wolves that once roamed the slopes of Bear Mountain, which looms large above the oak-studded valley.

The cemetery is available to veterans from any branch of the military, as well as their spouses, who are buried in the same grave as their husband or wife who served. It is an immaculate and tasteful place, neatly landscaped with either native or climate-appropriate plants. The graves, each marked with a white marble headstone, are arranged with military precision in tight formation in the burial areas with a surface of sandy decomposed granite, which is raked almost daily.

The National Cemetery at White Wolf has special significance for Tehachapi residents, for the first casket buried there on July 2, 2009 belonged to Major Jason E. George, a Tehachapi High School graduate who went on to West Point and served in the Army with distinction. He was both an outstanding athlete and student, and I photographed him and talked with him as he participated in different sports at THS. Jason was unfailingly polite and a person of class and quality, even as a teenager. He lived a life of accomplishment until he was killed by an explosion in Bagdad, Iraq at the age of 38 on May 21, 2009. It is very fitting that the first casket buried in a National Cemetery for veterans in the Tehachapi Mountains contains a Tehachapi native son.

Since Jason George's interment, there have been many other Tehachapi veterans who joined him at White Wolf. There are almost 1,400 graves there now and more are added each week – the cemetery conducts services Monday through Friday and can handle up to six funerals a day, and on some days they do conduct the maximum of six ceremonies.

Many of the veterans buried at Bakersfield National Cemetery are among the 16 million Americans who served in World War II. There are fewer than 350,000 of them still living. BNC also holds the remains of veterans who served in Korea, Vietnam and many who were lucky enough to serve during times of relative peace, and estimates that there is enough burial space for eligible veterans and their dependents for at least the next 50 years.

I recommend that everyone make an occasional visit to the Bakersfield National Cemetery. It is open during daylight hours every day of the year, and it is a peaceful, solemn and dignified place. Our country has sometimes fallen short in its treatment of veterans, especially those who have suffered grievous wounds in battle and require extensive medical care, but this does seem to be improving, and it is certainly hard to find fault with the honorable way that the National Cemetery Administration treats fallen veterans.

The men and women who served are provided with a gravesite and liner, burial services, headstone, interment flag and perpetual care of the gravesite in elegantly-maintained surroundings. The Bakersfield National Cemetery has become a source of pride for the residents of Kern County, and paying your respects to our deceased veterans is a worthy and rewarding way to spend an hour of your time. 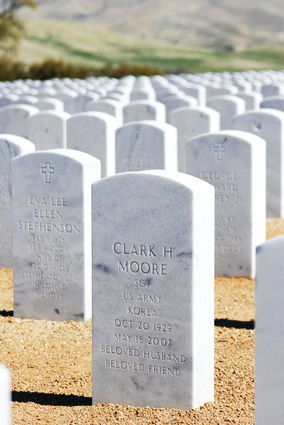 The headstone for Clark Moore, a well-known Bear Valley Springs resident who was renowned as an expert birder.