Rattlesnakes? Brumation? The snakes are back. . . . 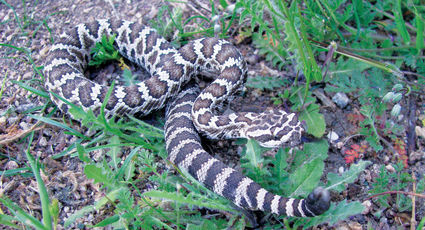 A young Northern Pacific rattlesnake. NOT more dangerous than larger ones.

Longer days, warmer temperatures and changing barometric pressure have started bringing about the annual reappearance of snakes in the Tehachapi Mountains. They've been here all along, of course, but have spent the colder months tucked away in an old rodent burrow, rock crevice, fallen log or some other hibernaculum.

This period of cold weather dormancy among snakes, lizards and tortoises is called brumation, from the Latin word "bruma," meaning "midwinter" or "winter solstice." While it is common to hear people talk about snakes "hibernating," technically only mammals, which of course are warm-blooded, enter into hibernation.

Cold-blooded creatures like reptiles, known as ecotherms, also enter a state of torpor to avoid low temperatures, but it is known as brumation. It is less rigid than hibernation by mammals – during an early warm spell, lizards and snakes may move around or emerge from their hiding place, only to return and brumate for more weeks if the weather gets cold or even snowy again. Mammals typically do not re-enter hibernation.

Brumation is not without risks to reptiles – it is a little akin to being in a coma, with accompanying hazards. Reptiles that enter brumation with injuries, for example, have a hard time healing because their metabolism is so low, and every year reptiles who enter brumation don't survive the process.

Temperatures usually have to rise above 60 degrees during the day to cause reptiles to end their brumation. That has happened, of course, so we've started to see lizards and snakes again. It seems to me that the smallest lizards are the first to appear, followed by larger lizards and then snakes.

Generally it is the male snakes who emerge first, looking to establish territory and be ready for any mating opportunities when the females appear. The males of some species will fight for the attention of a receptive female, and hikers have encountered two rattlesnakes, reared up off the ground, facing each other in what appears to be an elaborate dance or courtship ritual. It is actually a fight between two male rattlers for access to a nearby female.

The re-emergence of snakes is no reason to panic, but there is also good cause to be careful – we do have rattlesnakes, and their venom is dangerous to humans and pets. Fatalities are exceedingly rare – of the estimated 7,000 to 8,000 bites by venomous snakes each year in the U.S., fewer than five result in death. Most fatalities occur east of the Rockies. An estimated 25 percent of rattlesnake strikes are what is referred to as a "dry bite" – it is a defensive strike and no venom is injected.

And contrary to urban myth, baby rattlesnakes are NOT more dangerous because they "haven't learned to control the amount of venom they inject and will give you a bigger dose." This odd bit of nature lore gets repeated constantly, and there is zero evidence of it. Larger rattlesnakes having considerably more venom, are likely to inject more of it. Best advice: don't get bitten by any rattler, large or small.

Almost all rattlesnakes found in the Tehachapi Mountains belong to a single species: the Northern Pacific Rattlesnake (Crotalus oreganus oreganus). There is a great diversity in appearance of these snakes, from very light to very dark, and they may have reddish, greenish or grayish overtones. Nonetheless, they are all Northern Pacifics. Oldtimers often refer to the darker rattlesnakes found in more forested, higher elevations as Timber Rattlesnakes, but actual Timber Rattlers are an eastern species not found on this side of the Rockies.

In the foothill canyons to the east you can sometimes encounter Northern Mohave Rattlesnakes (Crotalus scutulatus scutulatus), occasionally referred to as Mojave Greens because of the greenish hue some of these snakes exhibit.

These two species can usually be distinguished by the markings on their tail, near the rattle: in Northern Pacifics, the dark bands tend to be much wider and the light bands tend to be considerably narrower; in Northern Mohave rattlers, this pattern is reversed, with the white or light bands usually wider and the dark bands narrower. Admittedly, most people don't like to get close enough to examine either end of a rattlesnake.

But there's good news: rattlesnakes typically avoid people. They don't always avoid places where people live and work, but they do try not to cross paths with humans. When this does happen, rattlesnakes tend to vibrate the rattles on the end of their tail so rapidly that it sounds more like a buzzing than a rattling sound. This is a warning that is good to heed.

Even with rattlesnakes' retreating behavior and the buzzing warning, people and pets do occasionally get struck by rattlesnakes in the Tehachapi Mountains, requiring immediate medical attention at a hospital or veterinary clinic to administer antivenin.

Happily, you can usually avoid rattlesnakes by being cautious around boulders and wood piles where they like to reside. Also, be aware of their thermal requirements: snakes have a fairly narrow window of comfort, typically between 65 and 85 degrees Fahrenheit. So in cooler weather be more cautious of sunnier areas, and on hot days, look out for snakes in the shade. 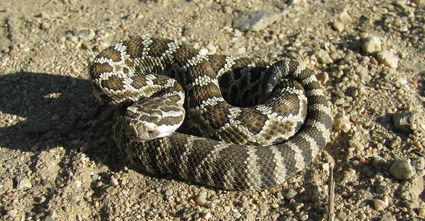 Lastly, I've often heard people talking about a given year being "a bad year for snakes." When you consider that any snake that is not a new hatchling was also alive and around in previous years, it is obviously a nonsensical statement. You might happen to encounter more snakes in one year than another, but every one of them, except for the babies, was also present in prior years. You just didn't cross paths with them.

Be aware of your surroundings as you go about your life, use caution in areas where rattlesnakes live and you should be fine.