Springtime, Easter and the season of ravens nesting

I took this photo following a snowstorm as a large raven looked for food beneath the snow. The shaggy-looking feathers under the throat are a distinguishing characteristic of ravens.

We usually have a big Easter egg hunt at our old farm on Cherry Lane for the children of family and friends. Of course it didn't happen this year because of the pandemic. But most years, a few uninvited guests leave with eggs: a couple of resident ravens help themselves to eggs that the kids hadn't found yet.

Ravens don't just score a few hard-boiled chicken eggs, but even plastic eggs have proven tempting to those large black birds – I have seen ravens fly away with a brightly-colored plastic egg in their mouth, and found plastic eggs that a raven had opened, removed the treat, tore open the package and ate the candy. There are few food items not on a raven's menu.

Ravens are currently nesting in the Tehachapi Mountains, building their large stick nests in oak trees, conifers, atop power poles, on signs outside large buildings and other imaginative places. Look closely and you can usually see the female raven's head just barely visible above the edges of the nest.

Ravens, red-tailed hawks and great horned owls all use the same type of open stick nest, which are typically built by the hawks or ravens. They will compete to use the same individual nest in different years. There was a large nest visible in the first cluster of valley oaks on the east side of Highway 58, just after you enter on the Tucker Road onramp and head down the hill, and over the years I saw it used twice by red-tailed hawks and three times by ravens before it finally blew out of the tree.

Raven nests are not a thing of beauty. The outside may appear reasonably tidy and well-camouflaged, but when you examine them closely and especially when you look down inside the nest from above, there is nearly always an assortment of fabric scraps, dryer sheets, pieces of wire, cardboard, hay baling twine, upholstery stuffing, bread wrappers and other scavenged material. Of course raven aesthetics are different than those of humans, and the important thing for ravens is that their babies have a large cushioned nest – they don't mind if it is lined with castoff items that we consider trash.

After the females lay from three to seven bluish eggs, she incubates them for about three weeks. Only the female sits on the eggs, but the male stays close and will help protect the nest and bring the female food. The father raven will try his best to discourage any intruders that might threaten the babies.

Once the nestlings hatch, they stay in the nest for about five weeks and both parents bring them food. Ravens are consummate omnivores, so they will bring their young a variety of foods, including carrion, fruit, discarded food, large insects. . . even Easter eggs. When the young fledge, they stay with their parents for about six months, learning the many skills it requires to be a successful raven. 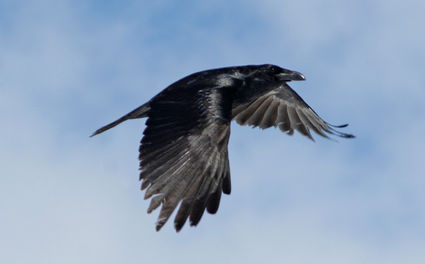 This raven was returning to look for unfound eggs at our place one Easter Sunday.

Ravens have been recorded living more than 40 years, though in the wild their average lifespan may be much shorter. They are amazingly adept and adaptable, and they are thriving – you can see them every single day if you live in the Tehachapi Mountains, even flying acrobatically during the windiest days when almost no other birds are willing to attempt prolonged flight. In many respects they are "The Ultimate Bird" and observing them is always interesting.