I highly recommend reading the book, "Misty: First Person Stories of the F-100 Fast FACs in the Vietnam War." This book is a collection of first person stories of 155 fighter pilots who flew in a special top secret mission during the Vietnam War.

These are personal stories, full of emotion, drama, tragedy and sometimes, humor. I should warn you that the authors use fighter pilot language and their memories are vivid and unapologetically coarse. This was a long problematic war. The book was edited by Maj .Gen. (Ret.) Don Shepperd, Misty 34.

Donald W. "Shep" Shepperd grew up in Colorado and graduated from the fourth class of the United States Air Force Academy in 1962.

He flew for TWA, was the National Sales Manager for Grumman-American Aviation Corporation selling light aircraft and retired from the Pentagon as a Major General and head of the Air National Guard after 39.5 years in uniform.

In the book he wrote: "One day an old, gray, bent and stooped Misty will hold his great-grandson in his lap and the young child will be fondling a dusty set of military medals, and he'll look in the eyes of his great-grandfather and ask, 'Were you a war hero?'

"The old man's eyes will mist, his mind will flood with memories, he'll see tracers passing close to his canopy and feel the shock waves of triple A rounds beating against the fuselage. He will see black flak exploding in the air and hear the depressing sound of parachute beepers.

"His heart rate will increase as he gets low on fuel and warning lights flash on the instrument panel. He will feel the sharp thump of rounds impacting his aircraft and smell acrid smoke in the cockpit. He will look in the rearview mirror and see flames. He will hear the voices of men on fire and in danger. He will once again encounter the depressed feel of landing after losing a comrade or failing on a rescue attempt.

"He will clear the lump in his throat and whisper quietly and truthfully, 'No, son, but I flew with men who were.'"

George Everett "Bud" Day is a retired U.S. Air Force Colonel and Command Pilot who served during the Vietnam War. He is often cited as being the most decorated U.S. service member since General Douglas MacArthur, having received some 70 decorations, a majority for actions in combat.

He reported to Phu Cat on June 25, 1967 with Detachment 1, 416th Tactical Fighter Squadron and assumed command of the new top secret program officially named, "Commando Sabre." At the time, Bud Day was a Major and he was selected as the first commander because of his extensive fighter background and also because he volunteered.

I always wondered why this group of extraordinary courageous men were called MISTYs and thought it might be an acronym, but no, the reason was very simple. Bud Day selected the unit call sign, "MISTY," because it was his favorite song! It's a great song, too. Check it out on YouTube.

Day said when you add the descriptive words "difficult and dangerous" to any mission, the fighter pilots will come flocking. He said he was besieged with volunteers.

The Air Force decided to use F-100 or "Huns" as FAST-FACs (Fast Forward Air Controllers). They called them "Super FACs," because the aircraft were Super Sabres.

Day's F-100 was shot down on Aug. 27, 1967. On his 26th Misty FAC mission, Day was shot down by ground fire over North Vietnam. During the ejection, Day's right arm was broken in three places, along with other injuries. His crewman was quickly picked up by a rescue helicopter, but Day was captured by local militia, beaten and tortured. Somehow he survived the horrendous and agonizing treatment, and never did he reveal any useful information to the enemy.

MISTY 40 – Dick Rutan describes an eerie and bone chilling story titled: "The Fiery Loss of Strobe 01". Dick Rutan writes that he and Captain Donald E. Harland had just backed off a tanker when they heard a MAYDAY call. The distress call was from Strobe 01, an RF-4C reconnaissance or recee aircraft coming out of North Vietnam, just above the DMZ (Demilitarized Zone, dividing North from South Vietnam).

After determining that they were on a head on course to Strobe 01, they requested vectors to join up with the Phantom. When they rendezvoused with Strobe 01, they were checking for holes, streaming fluids or fire. There was a small hole in the belly near the aft part of the camera bay and a small flame was flickering in the hole.

There was something highly unusual about this flight however. There was a General Officer in the front seat and the person that they had been communicating with was a Major in the back seat! Generals were prohibited from flying into North Vietnam.

Strobe acknowledged the fire and stated that they would bail out and the F-100 crew were anxious to witness a by-the-book ejection sequence with the F-4 Martin Baker seat. It was nearly two minutes before the rear seat fired, because the General had ordered him to wait. 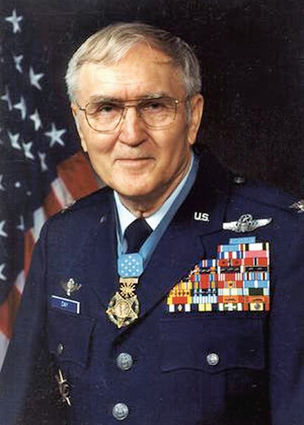 As Rutan and Harland watched the textbook ejection, they expected to see the front seat fire, but instead when they looked back they couldn't believe the horror that was before them. The front cockpit was totally engulfed in fire. It was at that point that Rutan started yelling, "Strobe 01! BAIL OUT! BAIL OUT!" He was so engrossed in watching and yelling for Strobe 01 to bail out that he didn't seem to realize that he was following the F-4 down.

Harland screamed at Rutan to pull up and he wrote that if it had not been for Harland's stern direction, he would have crashed right beside Strobe 01. It was only later that he realized Gen. Bob Worley was already dead after the back-seater ejected.

That is just one of many, many gripping and emotional stories. Be sure to order the book and read it.