Dandelions: lighten up, they're more delicious than frustrating 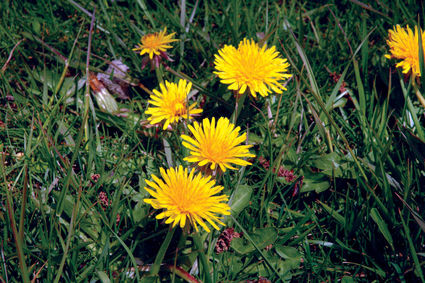 For many centuries, humans have cherished dandelions. It's only been since the advent of American lawn culture that they were seen as a nusiance.

Our ongoing spring storms, and occasionally sunny days in between, have brought out those little yellow flowers that most lawn gardeners detest: dandelions. But I must confess that I am the exception – I like dandelions. And until fairly recently, so did most people.

This incredibly widespread plant is native to Europe and Asia but is now naturalized throughout most of the temperate regions of the world, and is found from coast to coast in the U.S.

Dandelion (Taraxacum officinale) is a low-growing perennial that forms a long, milky taproot and produces almost glowingly bright yellow flowers on hollow stalks that range in height from a few inches to a foot off the ground.

Dandelion has a number of common names, including puffball, Irish daisy, blowball and yellow gowan. The jagged, deeply-notched leaves are the source of the best-known common name: Dandelion, from the French "dent de lion," or "lion's tooth."

I realize that at this point, many readers are shaking heads or arching eyebrows in disbelief. "It's just a weed!" I hear you say aloud. "And a nuisance one at that."

True, true, but as weeds go, dandelion is quite likable. For one thing, these soft-leafed flowers produce no burs, stickers or spines – nothing sharp or pokey or poisonous, which is an immediate improvement over most weeds.

And the flowers are so brilliantly yellow, they make butter or lemons seem pale by comparison.

Finally, the gossamer seed heads, with a single puffball holding as many as 200 seeds with each attached to a silken parachute for wind dispersal, are both geometrically satisfying and fun to blow on.

Centuries of use to humans

Humans have been using dandelion both medicinally – as a diuretic, digestion aid and appetite stimulant – and for culinary uses for many hundreds of years. Roasted dandelion root has also long been used as a coffee substitute and as an addition to hot chocolate.

Wine made from dandelion blossoms has a rich history and legions of fans. An old song says that, "Dandelion wine can make you remember, the first days of spring in the middle of December."

My favorite way to consume dandelion was taught to me by one of my dearest friends and favorite people, Tehachapi legend Del Troy, who grew up in Pennsylvania among her German immigrant ancestors (the "Pennsylvania Dutch").

This dandelion salad using fresh greens and warm dressing is similar to that used for spinach, and Del used to help her grandmother prepare it more than 75 years ago.

How to make dandelion salad

To make it, gather about four cups of fresh dandelion greens, which are trimmed to remove the white area at the bottom of the stems and then washed.

Then you cut up three strips of bacon into small pieces and fry them until crisp. Remove the bacon pieces from the drippings and set aside.

Then mix 1 and 1/2 Tablespoons of flour, 2 Tablespoons of sugar and a teaspoon of salt together and add in one well-mixed raw egg, 1/4 cup of vinegar and a cup or so of water. Stir this until well-blended and then dump into the bacon drippings, cooking until hot and thickened slightly.

Then pour the hot dressing over the washed dandelion greens, mix lightly and add two chopped hard boiled eggs and the crumbled bacon pieces, and viola! The taste of spring, Pennsylvania Dutch style. I highly recommend it.

I know that dandelions are not compatible with our present concept of the lawn as a flawless green monoculture, pure as a putting green, unmarred by cheerful yellow flowers.

A harvest of dandelion leaves, which are more nutritious than spinach.

But despite the ocean of herbicides purchased and poured on them to wipe them out, dandelions return each spring to cheer those of us who like them and frustrate those who do not.

In this time of life disruption caused by the pandemic, do yourself and your family a favor, and gather some fresh dandelion greens and try out this recipe, it really is tasty. Bon appétit!