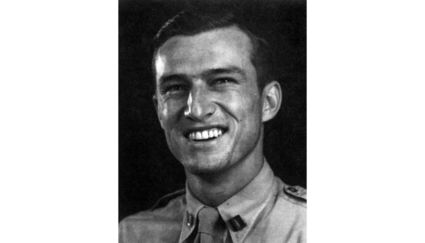 Isn't it interesting how enjoyable it is to hear or read historical stories about flying, especially if it occurred in our local skies? Nearly 22 years ago, my friend Bruce Porter was at MCAAS (Marine Corps Axially Air Station) Mojave. During World War II he was flying Corsairs and Hellcats. He wrote the book called "Ace! A Marine Night-Fighter Pilot in WWII."

When he found out how much I liked aviation history, he contacted his fellow Marine Corps pilot friend, Charles (Pat) Weiland in Beaufort, South Carolina and asked him to send me a copy of the book he wrote called, Above and Beyond. In the book Pat tells about receiving those cherished Gold Wings and flying the Chance Vought F4U Corsair. He signed the book "From one ol' aviation enthusiast to another!"

Part III of the book is titled, "The Desert," and tells about the scene at Marine Corps Air Station Mojave in 1944 when squadrons VMF-451 and VMF 452 were first organized. Pat is part of the history of the very beginnings of our Mojave Air & Spaceport. It was always enjoyable for me to email him about the latest happenings at the airport and he would email back with stories of yesterday.

In the book, Pat told how Corsair pilots were briefed by Joe Foss on the best way to shoot down a Japanese Zero: "You fly toward the target until a midair seemed inevitable, then fire all six guns and fly through the wreckage."

In one email, Pat said, "The books that I have written have prolonged the enjoyment of my life immensely."

Pat advised a young pilot to write about his memories of flying in the military. He said, "If you don't do it, then the events, of which you are now so familiar, will be lost forever. These recordings will have their ramifications when considering family and friends. And who knows, a few descendents down the line might even remember you! (Lord, forbid.) Just don't lose it. Record it."

I believe that is great advice for everyone. Even if it doesn't involve flying, write down your family memories to be passed on to your children and grandchildren. Reading the words written by people who loved you keeps them alive forever.

Marine Fighting Squadron 451 (VMF-451) was activated on Feb. 15, 1944 at MCAAS Mojave. The "Blue Devils" were one of 32 squadrons that trained at the base, and were collectively known as the "Mojave Marines." Equipped with the Chance-Vought F4U-1D Corsair, they spent nearly one year training for carrier-based operations under the command of Major Henry A. Ellis Jr., who remained the Commanding Officer for 17 months.

The squadron moved on board USS Bunker Hill (CV-17) on Jan. 24, 1945, along with VF-84 and VMF-221. This was the first fast-carrier deployment with three Corsair squadrons.

Pat relayed a warm and wonderful story to me about 400 love letters that were sent to a sweetheart by of one of the VMF-452 fighter pilots. In many of the letters, the pilot included information about happenings at the Marine Base in Mojave.

Unfortunately, the sweetheart sent him a "Dear John" letter and married someone else. Fifty-eight years later, the woman had Alzheimer's disease and her son found the letters when he was helping with her personal affairs. Curiosity won over and the son began seeking the author of the letters. He found that the former Marine pilot was still alive and this story became full circle. Reminds me of "The Rest of the Story" by Paul Harvey.

Here are some excerpts: "3-28-44: Each pilot gets their own individual especially fitted parachute. View from the back of the barracks: There is nothing but flat land for a half mile and then off to the right are a bunch of round domed Quonset huts going up for quarters for married men. Beyond that the desert goes 17 miles to a mountain where the richest silver mine in the world is. To the sides of the mountain the desert stretches some 80 to 100 miles to the snow capped mountains."

"4-10-44: Big wind blowing. By noon the planes are all tied down and the wind blows everything around. The roof of the W.R. barracks blew off and most of the windows out of the rest of the buildings. Lost power last night." 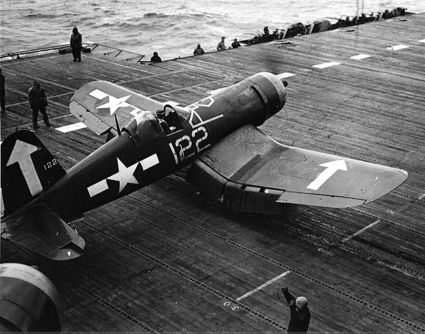 "4-11-44: Digging out begins. The wind has finally died down. The planes are full of sand." (Gee, that sounds familiar!)

I received sad news in April 2004 from Pat Weiland's son. After a lengthy illness Pat died peacefully with his son and wife holding his hand. One more of our "Greatest Generation" was gone, he was 86. I am so glad he took the time to write about his experiences, so we can read them over and over. I feel privileged to have had the opportunity to call him "friend."

Stay well my friends! See you on our next flight!