Gary Davies: a veteran and Tehachapi native who finds therapy in wood carving 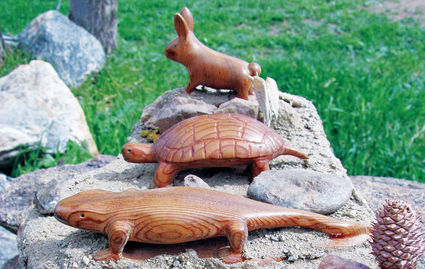 Creatures from the nearby Mojave Desert.

Gary Davies is a lifelong Tehachapi resident and military veteran who has found solace and satisfaction in hand carving assorted animals out of wood.

Gary, who was born in Tehachapi Hospital in 1959, has many talents and has spent his life working with his hands. His father taught him to weld when he was only 11 years old, and he worked as a welder for the Navy and in Texas oilfields. He has also worked in vegetation management, landscaping, carpentry and masonry.

The veterans Administration diagnosed Gary with PTSD, but he says the treatment he received did not help him.

"I was just given a bunch of pills, and those can turn you into a zombie," he said. "I felt like I didn't know my own name. That wasn't useful."

Gary has discovered therapies more to his liking: wood carving and fishing.

"It's very calming to do my carving, and I enjoy the challenge," he explains. "I'll take my carving projects with me when I go trout fishing in the Bishop area, and I'll find a beautiful spot by a creek to fish and carve. It's very relaxing to be next to a creek as it's babbling. I go during the week when there aren't many people, and I can savor the beauty and solitude."

Gary is the youngest of four children born to Dan and Joyce Davies, and his siblings are John, David and Elizabeth. Dan worked for the Kern County Recreation and Parks Deptartment and helped build Tehachapi Mountain Park in the 1950s. Dan was the first resident caretaker at Mt. Park, and the family lived there when Gary was a young boy. "It was great having Mt. Park as your backyard," he recalls.

Dan Davies was a heavy equipment operator, and he later helped construct and excavate Brite Lake. "I used to ride my Honda Trail 90 motorcycle down in the big dirt area where the lake is now," Gary said. "My Dad was one of the main bulldozer operators on that project."

A member of the Tehachapi High Class of '77, Gary left school early to join the Navy just after the fall of Saigon. He went to Pearl Harbor and then spent the next four years roaming the Pacific and the Indian Ocean on a guided missile destroyer and later a destroyer tender – the oldest ship in the fleet at the time which still had teak rather than steel decks.

He welded continually for the Navy, and when he got out he worked 16-hour days, six days a week in West Texas oilfields. Eventually he found his eyesight had been damaged, possibly by doing so much welding, beginning at such an early age.

Gary later became the lead sprayer for Tehachapi's yellow starthistle control program, and when that was discontinued he went to work for Union Pacific railroad doing vegetation management. He was responsible for weed control at 5,000 railroad crossings in California, Arizona and Utah, and travelled to 10 different states while working for UP.

Gary has worked with wood throughout his life, building manzanita furniture, burlwood clocks, etc., but it has only been the last two years that he turned his hand to carving animals. He says he was inspired by his father Dan, who would carve models of tractors and bulldozers.

Gary was given a vintage carving set by his friend Mary Cunningham, and he ended up with a lot of good carving material after replacing some big cedar beams on a garden structure repair job for Mary.

The animals Gary has carved are from throughout the world, including a giraffe, camel, kangaroo, bighorn sheep, hammerhead shark, manta ray and more. He did a trout series that depicts the entire lifecycle of the fish, with nine carvings from an egg all the way up to the mature fish.

Gary has suffered from six heart attacks in the past 10 years, and like many of us Kern County residents, he believes it is an injustice that there is no veterans' hospital in Bakersfield, when so many veterans have lived in Kern County. 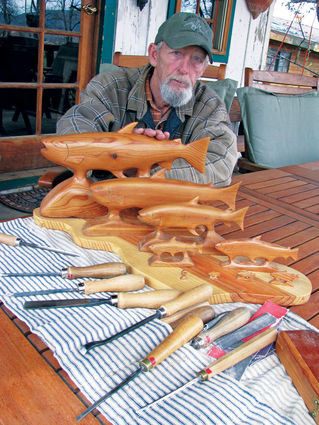 Woodcarver Gary Davies created this set depicting different stages of a trout's life. The vintage carving set he uses was given to him by Mary Cunningham.

But Gary keeps working with his hands, and strives for a life that is uncomplicated. "The simpler the better, as far as I'm concerned," he says. He has three grandchildren, and he decided that he would try to focus on the positive in life, and leave a legacy as a woodcarver who turned pieces of cedar into realistic animals. Carving is his artistic outlet as well as his therapy.