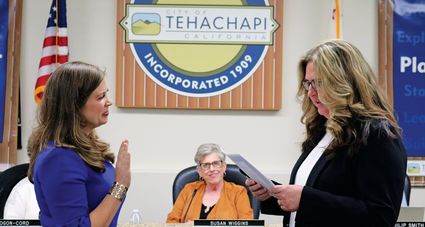 The first order of business at the March 2 Tehachapi City Council meeting was to choose a new council person to fill the at-large seat held by Kenneth Hetge who resigned on Jan. 2.

Four applications were received by the City and all were qualified for the position but it was Christina Scrivner who was chosen in a 3-1 vote. Councilman Phil Smith nominated Kim Nixon, a prior City Councilwoman now serving on the Planning Commission. "I am very humbled by this opportunity to serve my community," said Scrivner who, in addition to heading the Adventist Health Hospital Foundation, is the wife of 2nd District County Supervisor Zack Scrivner.

Scrivner is one of the founding members of the Foundation, the fundraising arm of Adventist Health Tehachapi Valley, an organization responsible for raising $3.6 million for hospital improvements.

City Manager Greg Garrett said that when Scrivner submitted her resume, he hired an independent attorney to make sure there was no conflict of interest issues. Scrivner said that she also consulted an attorney before submitting her resume. In neither case was conflict found, clearing the way for Scrivner's appointment. The seat will be up for election in November, 2020 when it will become a District 2 seat. As a resident of District 2, Scrivner will need to run for election in November.

Other Council candidates were aerospace engineer Steve Hamblin and Davin Blain who has been a maintenance operator for the Golden Hills Community Service District for the last two years.

Other news from City Council

City Manager Greg Garrett announced new awards received by the City. Two of the awards came from the California Association for Local Economic Development (CALED). One award was for the look and impact of the World Wind and Solar project at 228 W. Tehachapi Blvd. and the other was to the Tehachapi Police Department for the Northside Neighborhood Cleanup project, involving not only the police department and city volunteers, but neighbors helping neighbors as well.

City Finance Director Hannah Chung has received the highest award offered by the Government Finance Officers Association (GFOA) to any entity including schools, cities and municipalities for her preparation of the city's 5-year budget for 2019/20 to 2023/24.

Community Engagement Specialist Key Budge and Community Development Coordinator Corey Costelloe, both journalists with radio experience, have developed a podcast soon to be available online called TehachaPod. City Manager Greg Garrett is expected to be a frequent guest. Read more in the press release in this issue.

Development Services Director Jay Schlosser announced the City had just been awarded a $1 million grant to complete Pinon Street from Heritage Oaks to Dennison. The City scored second highest in Kern County. Construction is not expected until 2022. Schlosser said the road will be 36 feet wide with two lanes and eight feet on either side.