Recently we have been going through some of our book and video collections. I ran across a book that was given to me back in 2004 by the author. "I'm No Hero" by Charlie Plumb. I want everyone to know that I believe Charlie Plumb IS a hero! Wow! You need to read this book.

In the summer of 2004, we were witnessing the exciting and historical flights of Scaled Composites and Paul Allen's SpaceShipOne. During that time, we had the opportunity and pleasure of meeting some of the world's most interesting people.

Friends from JPL in Pasadena brought a pop up trailer and parked on the area in front of our hangar. They laid awake all night wondering if the wind was going to carry them to Barstow! For the flight in September, they pulled the pop up inside the hangar, just in case.

I felt it was important to make sure everyone had a good evening meal and breakfast in the morning, so we had barbecues the night before each flight that seemed to get larger with each flight. Dick and Kris Rutan were there one night and Kris came up to me and said, "I want you to meet a friend of mine, you have to hear his story!" She introduced me to Charlie Plumb, Navy fighter pilot from the Vietnam War, who suffered as a POW (prisoner of war) for six grueling years.

I mentioned that one of my schoolmates, David Rehmann, had been a POW in Vietnam as well and Charlie knew him.

CAPT Joseph Charles (Charlie) Plumb, Jr., graduate of the Naval Academy at Annapolis, was shot down May 19, 1967, while flying an F-4 Phantom on his 75th combat mission over North Vietnam, only five days before he was to return home. He was captured, tortured and suffered imprisonment in an 8 by 8-foot cell as a POW in various communist prison camps for 2,103 days ... nearly six years. He was released in 1973.

Charlie is one of the most sought after achievement speakers today. His insights on how to cope with the difficulties, as well as, the opportunities in life, have a positive impact on those who hear his message, those who read his books and those who come to know him as a friend.

Captain Plumb's Military honors include two Purple Hearts, the Legion of Merit, the Silver Star, the Bronze Star and the P.O.W. Medal.

He wrote a book called, "I'm No Hero," and he tells about the torture rooms, the degradation, loneliness, tedium, hunger and pain, but he also tells about communication systems and the relationships with the other prisoners and with their Creator.

He was known as the Chaplain in his camp during the last two years of captivity. He told me that he already had a foundation of survival tools learned in life from his parents, preachers, youth leaders and teachers. Of course, as a youngster, he didn't realize that these skills would be so important later on and actually help save his sanity during the intense suffering.

He said, "The life-saving techniques I used in that prison camp had more to do with my value system, integrity and religious faith than anything I had learned from a textbook." 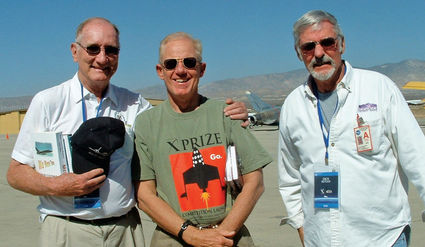 He told me how important it was to memorize scriptures. The Catholic boys helped us to remember because they had to memorize for the Catechism. Somehow they convinced the guards to bring Bibles into the POW's and for a day and a half they copied scriptures; they copied the Christmas story, the Easter story and the book of Job. The guards confiscated the Bibles after that, but by then their hearts and minds were fortified with God's Word and it gave their spirits hope.

What a guy! If you want more information on Charlie Plumb's books, tapes or speeches, check out his website at: http://www.Charlieplumb.com.

Thank God many of our POWs were able to come home in 1973. I was delighted to meet this inspirational, righteous and patriotic man who gladly shares his faith with all who will listen.