Pat Gracey: a switchboard operator when there were only 200 phones in the Tehachapi Mountains 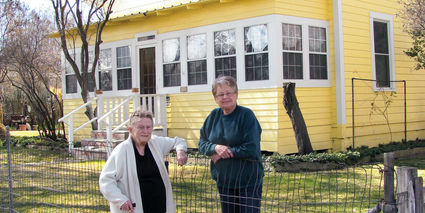 Pat Davis Gracey talking to her niece Gerry Starks, who owns the landmark 1880 home in the background.

There aren't many Tehachapi residents left who remember the days when almost every phone call made in this area required a person working at a switchboard, an operator who manually put a plug into a jack to complete a call. Pat Gracey, 91, not only remembers that time, she actually was one of those hard-working women who made phone calls possible.

Patricia Davis Gracey was born in Mojave on September 2, 1928, the youngest of four children born to Chauncey and Maude Davis. She was raised in Tehachapi, and she is one of the living treasures of our community. She writes the popular Spirit of Tehachapi column for The Loop newspaper, and this delightful lady has an incredible memory and a wonderful personality. We have been friends for many years, and she is an inspiration to me and countless others.

Pat was delivered at home in Mojave by Dr. Warren. Her father, Chauncey, was a World War I veteran who moved to California from Arkansas in 1921. The Davis family first came to Tehachapi in 1923, and then moved to Mojave in 1926 so that Chauncey could run a gas station there. The family moved back to Tehachapi in 1937, purchasing 160 acres in the Old Town Road area, near Grand Oaks Ranch.

On Christmas Day of 1940, the Davis family moved into a beautiful old home on the corner of Curry and F Streets. This big yellow house, lovingly maintained for many years by owner Gerry Starks, who is Pat's niece, was originally built in 1880 by the Gallinger brothers. In 1926, it was bought by Jim Brite and his wife Lucinda Caroline Brite, who was known as "Callie" when she was younger and as "Grandma Brite" by everyone in her later years.

Pat and her three siblings – Everett, Evelyn and Thomas "Buster" Davis – loved living in the center of town in the house with tall ceilings. Pat recalls the morning of April 26, 1946, when she stepped off the front porch to go to school in the morning – and promptly sank up to her knees in a deep Tehachapi spring snowfall. "That was the only day during my entire school career that school was cancelled because of snow," Pat recalls. "We had plenty of snowy days, but they wouldn't cancel school. Kids in town who could make it came to school, and the ones who couldn't stayed home."

Pat graduated from Tehachapi High School in 1946, one of 16 students who walked across the stage to receive her diploma. The THS Class of '46 should have included about 25 students, but some of the boys had enlisted in the military and had already left. "The military told the boys if they enlisted in January, they would still receive their diplomas in June as if they had stayed in school, so some of them did and they shipped out in February," Pat remembers. "Dick Johnson was the student body president, so after he and the other boys left, Hugh Vasquez had to fill out the rest of Dick's term. And we lost a few of our girls who got married as seniors – in those days, you couldn't go to high school if you were married."

After she graduated, Pat went to work as a switchboard operator at the telephone office, which was located on Tehachapi Boulevard, just east of the current Kelcy's Restaurant, which at the time was Squire's Cafe. There were two storefront windows, one looked into the telephone office and the other had a view of the living room of chief operator Adalee McLaughlin, who lived next door to the phone office. Other operators of the era included Verlie Beauford, Bertha Weaver, Barbara Enland and Betty Dowdy.

A cot was set up for the night operator to catch a nap. Pat was a light sleeper, so if she dozed off, she would try to awaken at the first soft sound of a call being placed. "There was a buzzer that would go off to alert you to a call, and it was so loud that it would send you through the roof if it rang," Pat laughs.

The total population of Tehachapi in those days was only about 1,500 people, and there were only about 200 working telephones in the area. Most people were on a party line, which meant they shared their phone line with a neighbor or two. Phone numbers would typically be a number, like 67 for example, followed by one of four different letters: M, W, J or R. Each customer with the same number shared a line, but a different letter indicated a different ring tone. So the operator would let customer 67M know by ringing one long and one short ring. Customer 67W would be given two long rings, 67J would get three long rings, and 67R would be given four rings, though Pat said that the R letter was seldom used.

There were only a few private lines, meaning those customers didn't have to share the line with neighbors. Among those with a private line were Drs. Harold and Madge Schlotthauer, who owned and operated Tehachapi Hospital, and their number was also unlisted.

There were only about a half a dozen pay phones in town in those days, located at the Tehachapi Depot, the Summit Hotel, telephone office, Roundup, and Two J's Bar. In the back of Two J's was an illegal bookie joint, where customers could bet on horse races. "We used to put in calls from Two J's right away, because they needed to get the horse racing results," Pat recalls. "That was an unspoken, strictly unofficial policy, but boxes of chocolates used to appear for us from time to time as a result."

When people called looking for Tehachapi's limited law enforcement at the time, either the chief of police or the one sheriff's deputy assigned to the area, the call would be put through to their offices, but the officers were often gone.

"If no one answered, we tried the various phones at the depot, restaurant or bars, and if we still couldn't find a cop, there was a red light mounted outside the telephone office, and we'd go turn it on so if an officer happened to be driving by, they'd see it and contact us to see who needed them," Pat explained. A simple red light on the outside of the building – quite a huge difference from the 911 system of today.

And those few pay phones in town? If you wanted to use one, you dropped in coins, and the switchboard operator would hear tones indicating which coins were used: "Dimes would go 'ding ding,' quarters would make a deeper 'dong' sound, and nickels made a quieter sound," Pat said. "We had to hear that the proper coins had been dropped in before we connected the call. There were only two options for long distance: Mojave or Bakersfield, which cost 40 cents each, and you got three minutes."

In those days, there were just two lines available for long distance calls, meaning that only two people at a time in the Tehachapi Mountains could be talking to someone outside the area. There was a third back up line that could be used in emergencies, but Pat said that it echoed and wasn't much good. 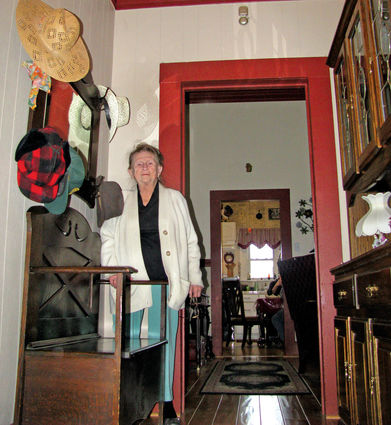 Pat Davis Gracey inside the 1880 Curry Street home where she was raised.

I plan to include more stories from the incomparable Pat Gracey in the future. She is a joy to talk to and a tremendous historical resource.