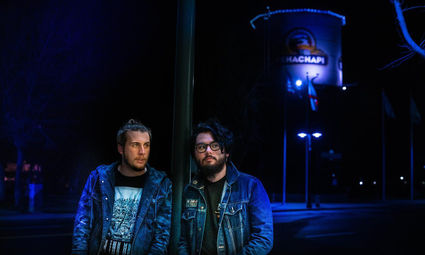 Tehachapi is home to an abundance of talent, especially in the arts, which includes local musicians. New on the Tehachapi music scene is Bear Valley based duo The Band RAFTERS, a collaborative effort between front man and rhythm guitarist Joe Jones and lead guitarist Jon Wier.

They formed the band in 2019 and since then have released three songs, which are available on the major music platforms Spotify, Amazon Music, Apple Music and iTunes.

Their fourth single "Take Me Home" released on Friday, Feb. 21. It is a rock anthem about trying to find peace and belonging amidst chaos and heartbreak. The duo started working on the track this past November.

"As with most of our songs we started with the chorus and built the song around it. We wanted to up the ante after 'Sorry [That I Love You]' and make a more epic anthem song. Even though this one isn't directly one of our stories, we loved the lyrical themes of wanting to run away and try to make life better than it was before," Jon said.

Although The Band RAFTERS officially launched in 2019, both musicians have lived in Tehachapi the majority of their lives and have been playing music for many years. Joe and Jon met at the Tehachapi Church of the Nazarene's youth group about five years ago under Pastor Goose. The duo had been talking about doing music for a while before they both agreed last March to go all in with it and have since built their own studio.

Both Joe and Jon have a background in listening to and playing worship music, from which they borrow inspiration. They admit that the band itself is not a "worship or Christian band," and their focus is to simply create songs that are relatable to everyone. Their sound emulates a lot of the ambient tones that are commonly found in popular worship music. These sounds are mixed in with influence from rock groups Imagine Dragons and Thirty Seconds to Mars, among others.

"We mainly want to have a sound that resonates with people from all backgrounds, not just our own," Joe said.

You may remember them from when they played three years ago at the City of Tehachapi's "Battle of the Bands" event under the name Lightwell (printed Litewell). They took third place two years in a row and were only playing covers at that point. Jon said, "But you gotta start somewhere!"

Since then, they have released three other singles chronologically – "Uncomfortable," "Hold You Tight" and "Sorry That I Love You."

"Uncomfortable," (their first track) was written on the couch in Jon's living room.

"We had just started jamming and noted how weird it was to try to make up a song from nothing. Joe started singing the lines, 'and I'm uncomfortable...' and the rest of the song came from there," said Jon.

"Hold You Tight" was a track that Joe had been working on for a few years. It is his story about having gone on a few dates with a girl from England. Despite Joe falling for her, she still wanted to return home.

"Everyone thinks it's a very happy love song, but it's more so a pre-breakup song," Jon said with a wry smile on his face.

"Sorry That I Love You" started while listening to a Billie Eilish song. Her lyrics "I didn't mean to say I loved you," and "I don't want to" was a cool idea, so the band used that as the premise for their own song. This song is actually based around a short relationship that Jon had been in one year prior.

Ironically, the location that Joe chose as the setting happened to be where Jon went on his first date with that girl, which Joe did not realize at the time. This was also their first time recording instruments from home (which were previously recorded at Aum Studio in Bakersfield). Therefore the band took a lot more time with the development of the song.

"We have been trying to constantly improve our sound, and I feel like this song ["Take Me Home"] is a huge step in the direction that we have been wanting to go," Joe said.

When not making music, Jon teaches guitar for beginner to intermediate levels at Slice of Life Enrichment School on Mondays and Wednesdays. He brings the same soulfulness to his students by teaching them basic songs and chords to allow them to discover their own sense of rhythm, as Jon has. His weekly Challenges are a hit with his students. When not teaching, Jon is mostly working on his music and plays worship at Valley Baptist in Bakersfield. Outside of music he is a huge sport and video game fan.

Joe spends most of his off time with his hobby of photography, videos and small scale film making. He recently shot a music video for a rapper in Los Angeles. Joe is also a coffee enthusiast, if not a fanatic. Joe likes to live his life in the words of Casey Neistat, "Do More!"

These gifted upcoming artists are in the midst of planning performance dates in Tehachapi and Kern County. They can be followed on Twitter, Instagram @TheBandRAFTERS and Facebook @RAFTERSband for updates.