A terrain relative navigation system under development by Draper of Cambridge, Mass. could be the eyes for the next lunar lander module. The system was tested on a Masten Space Systems Xodiac rocket in Mojave, California on Sept. 11, 2019. The mission was part of the Flight Opportunities program effort to mature space technology through flight.

NASA's Armstrong Flight Research Center in California contributed to the agency's Artemis mission to return to the Moon and advanced preparation for research of experimental aircraft and systems to validate clean and quiet electric propulsion and advance commercial supersonic flight technology without the window-rattling boom.

The center also supported space science achievements such as the discovery of the first type of molecule ever formed called helium hydride and Earth science missions such as fire and smoke impact on regional and global environments. In addition, Armstrong was recognized for its key contributions to a system that has saved lives in the nomination and award of the Robert J. Collier Trophy.

Armstrong personnel supported the successful testing of the launch abort system as part of the Orion spacecraft that will enable the Artemis missions to the Moon, during which the first woman and next man will land on the surface. Once proven, the systems will eventually take astronauts to Mars.

The Lockheed Martin Skunk Works started building an experimental aircraft for NASA known as the X-59 Quiet SuperSonic Technology, or QueSST. This aircraft will help researchers study how people react to quieter sonic boom noise in an effort to revisit the restrictions on commercial supersonic travel over land and potentially reduce travel times drastically for long flights.

Regarding sonic booms, the Carpet Determination in Entirety Measurements, or CarpetDIEM, flight series at Armstrong featured an array with high-fidelity microphones arranged in several configurations. The arrays gave researchers the ability to obtain accurate sound data and assess the loudness of the sonic booms, just as they will measure the quiet sonic thumps from the X-59. How sonic booms look was a result of the first air-to-air images of the interaction of shockwaves from two supersonic aircraft during the Air-to-Air Background Oriented Schlieren flights earlier in the year.

Armstrong also accepted delivery of X-57 Maxwell Mod II, an experimental all-electric aircraft that will be used to collect data in support of enabling regulators to set certification standards for the emerging electric aircraft market. In addition, Armstrong prepared for future testing of the X-57 final configuration by testing the wing that will be used in later phases of the flight tests in the Armstrong Loads Laboratory.

NASA was part of the team that developed the software system that will assume control of an aircraft upon imminent ground collision, called the Automatic Ground Collision Avoidance System. The system has been integrated into military aircraft and saved eight pilots since it was fielded about five years ago. The team was awarded the 2018 Robert J. Collier Trophy, which recognizes the greatest achievements in aeronautics or astronautics in the country each year.

Another key achievement was the Ikhana team acceptance of the 62nd Annual Laureate Award, in the category of Commercial Aviation, Unmanned Systems, by Aviation Week & Space Technology. The Ikhana team was chosen for the unmanned aircraft's first No Chase Certificate of Waiver Authorization flight in 2018 without the need of a chase plane or visual observers as it operated in various classes of airspace.

NASA Armstrong also completed its first phase of Pilot Breathing Assessments (PBA) to study how pilots breathe to make it safer for them to fly. PBA will help researchers and engineers understand how flight conditions may cause pilots to experience a physiological episode during flight and help determine methods that may prevent these in the future.

The X-56A remotely piloted aircraft concluded its flight series at Armstrong. The aircraft has lightweight, flexible wings and a system that suppresses a potentially destructive vibration called flutter. The successes of the project could allow future airline designers to use such wings to conserve fuel.

The NASA DC-8 and ER-2 aircraft based at Armstrong participated in a joint campaign with the National Oceanic and Atmospheric Administration in a major campaign to improve its ground and satellite based forecasting models by taking a closer look at smoke. The joint Fire Influence on Regional to Global Environments and Air Quality (FIREX-AQ) effort looked through the smoke and fire to bring scientists data to understand how fuel and fire conditions at the point of ignition influence the chemistry of smoke, what happens to smoke as it enters the atmosphere, and how the chemical transformation of smoke affects air quality, and to a lesser extent weather downwind. 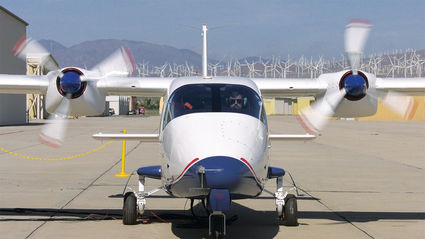 The electric motors for X-57's Mod II vehicle and their propellers were powered up and spun together for the first time as part of an integrated spin test. Chris Higbee, Project Engineer at Scaled Composites, is seen in the cockpit of the Mod II vehicle, which is the aircraft's first of three electric configurations. The wind turbines seen along the hillside in the background illustrate a noticeable, appropriate impression of the future final phase of X-57, known as Mod IV, which will feature 12 small electric high-lift motors and propellers along its wing.

The Moon is not just the focus of a future Artemis mission, a new sensor on the ER-2 used the moon in an effort to improve Earth observations. The airborne Lunar Spectral Irradiance Instrument (air-LUSI) flew aboard NASA's ER-2 airplane. The NASA-funded instrument is measuring how much sunlight is reflected by the Moon at various phases to accurately characterize it and expand how the Moon is used to calibrate Earth observing sensors.

Another breakthrough was the discovery of the universe's first type of molecule. Scientists believe that around 100,000 years after the Big Bang, helium and hydrogen combined to make a molecule called helium hydride for the first time. Helium hydride should be present in some parts of the modern universe, but it had never been detected in space until it was observed by the world's largest airborne observatory, NASA's Stratospheric Observatory for Infrared Astronomy, or SOFIA. Armstrong is SOFIA's home base.

Armstrong had a year of achievement in 2019. The center is preparing to make sure that 2020 will include new milestones, technology validation and science successes through flight.

The 2019 Highlights Photo Gallery is located at http://www.nasa.gov/centers/armstrong/multimedia/imagegallery/2019_achievements/index.html.

Video highlights are located at http://www.youtube.com/watch?time_continue=14&v=ID0qPJvtf8M&feature=emb_logo.

For information about NASA and agency programs on the web, visit http://www.nasa.gov.