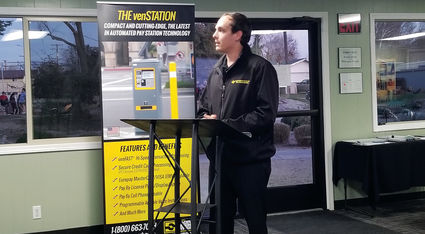 Connor Mossman from Pacific Parking Systems presented the venSTATION system to the TVRPD Board. The system is planned for the Brite Lake gate.

The Board of Tehachapi Valley Recreation & Park District voted unanimously at their Feb. 18 meeting to purchase an automated pay station for Brite Lake Campground. Connor Mossman of Pacific Parking Systems presented the venSTATION Automated Pay Station, a unit that can be customized to the needs of the District and modified as the need arises.

TVRPD Operations Manager Bill Fisher said that the Board actually voted to purchase such a unit four or five years ago but had not followed through. As the price of the unit has decreased, the Board felt that now would be the time to act. Currently, the entrance to the park is monitored by the Camp Host or other employees from the gate house during normal operating hours. Fisher said he estimated that a minimum of 10-15 cars daily sneak through the gate when it is unmanned causing a significant loss of revenue for the District. He estimates that the gate could pay for itself in about two years with the increase in revenue.

The venSTATION units can accept credit cards, cash or a QR code from a phone. Although it can also deal with coins, that feature will not be available at Brite Lake according to Fisher. He added that TVRPD plans to start slowly with day use passes only and then adding overnight camping. Overnight campers would be given a code valid from check-in to check-out. Eventually the system can be linked to online reservations for the campgrounds. Annual passes will also be available.

In other business discussed, Recreation Director Ashley Krempien announced that the website for the 2020 GranFondo was up and running and now taking registrations. The ride has a new logo and there will be four routes available – the GranFondo (100 miles), MedioFondo (63 miles), PiccoloFondo (40 miles) and FunFondo (18 miles). Check out more at http://www.tehachapigranfondo.com

TVRPD Board Meetings are held on the third Tuesday of the month at 5:30 p.m. in the TVRPD District Office, 490 West D St. Public welcome.