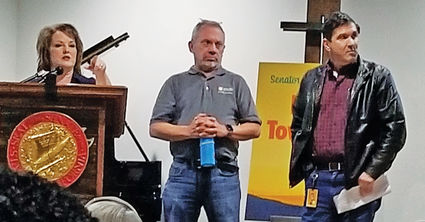 Grove began by stating that the greater Tehachapi area had been affected by PSPS more than any other region in California, and state environmental policies prevented the utility companies from performing certain necessary vegetation and grid maintenance. From information she has received thus far, one of the main complaints with PSPS was the lack of notifications and subsequent communication – many of the outages began with little to no warning. Tehachapi residents had reached out to Grove seeking assistance and she forwarded many heartbreaking stories to SCE.

Wiggins shared that on the one occasion when the city proper was without power, there were no businesses or grocery stores open and no gasoline available. Jake's Steakhouse, located in downtown Tehachapi, had a generator and opened early to be available to those without power. Dozens of residents flocked to Jake's grateful for a cup of coffee and to charge their devices. Outlying areas of Bear Valley Springs and Stallion Springs were without power for several days at a time, sometimes during 20 degree nights and 30 degree days. Some residents unknowingly heated their homes with unsafe methods, resulting in nine people being treated for carbon monoxide poisoning. Moreover, a generator started a house fire in Stallion Springs that destroyed the home and affected six to eight surrounding acres of vegetation.

Person represented the Emergency Operation Center. She urged all residents to register with ReadyKern and Smart 911, two important programs addressing public safety. ReadyKern is a state-of-the-art emergency notification system that alerts residents and businesses about natural disasters and other crises. This emergency notification system enables Kern County to provide vital information in a timely manner for a variety of situations, such as earthquakes, severe weather, fires, floods, or evacuation of buildings or neighborhoods. Residents can register for multiple locations (e.g., their children's school, friends' and relatives' neighborhoods) and receive notifications for all registered locations.

Smart911 helps protect families by furnishing crucial information to first responders. Downloading the app and creating a secure Safety Profile for a household allows the 911 dispatcher to see the emergency information that is provided in the profile when the call is dialed from a registered number.

Deputy Dorkin emphasized looking out for neighbors as PSPS accelerate opportunities for crime. He mentioned that a Neighborhood Watch Meeting is going to be held Feb. 18 at 6 p.m. at the Golden Hills CSD, 21415 Reeves St., Tehachapi.

Grove introduced Bob Stiens of SCE, who, along with many other SCE employees, has been very responsive to Tehachapi. Stiens has been intimately involved with emergency planning but most recently with "living and breathing" wildfire prevention. He stressed the importance of updating household information regularly with SCE, either by phone or online. He also admitted that during the PSPS season in 2019, SCE was "less than perfect" with their notifications. He explained in detail the situation with California's worsening wildfires. Instead of a fire season lasting several months, the current fire season is year-round; the fires are now bigger and spread much more rapidly. Unfortunately, according to the California Public Utilities Commission (PUC) maps denoting high fire threat districts, Tehachapi is a Tier Three, which is the highest wildfire risk. The town of Tehachapi is Tier Two.

SCE's plan of action to prevent, respond to and combat wildfire threats includes bolstering situational awareness, enhancing operational practices and hardening the electric grid. SCE is tackling the wildfire issue on several fronts. These include installing high-tech cameras that monitor wildfire activity by performing 360-degree sweeps every minute. Weather stations have also been installed on utility poles, providing critical weather data. Bare wires are being replaced by insulated wires, which will prevent sparks from developing should tree branches fall into the wires or wires fall to the ground. Regular fuses are also being replaced with remote automatic reclosers (RAR), fast acting fuses that trip quicker, removing the load from one circuit to another. Along with vegetation management dictating a minimum 12-foot clearance between trees and SCE power lines, trees up to 200 feet from wires are removed if they have a high risk of falling into power lines or have vegetation, like palm fronds, that high winds carry long distances into power equipment. Additionally, inspections are performed on a regular basis and all power lines in an outage area are re-inspected before they are re-energized at the conclusion of a PSPS.

Stiens emphasized that SCE's policy is to de-energize power lines only during elevated fire conditions to prevent ignitions, based upon what their data indicates. Outages are performed circuit by circuit, not by indiscriminately conducting an outage over a large area.

When Grove opened the floor to questions and answers, it was readily apparent that residents continue to be frustrated, angry and anxious. Comments from residents indicated that key issues for those affected by PSPS include lack of notification; communication difficulties; medically sensitive residents; loss of essentials, such as water, heat, refrigeration; and lost productivity and wages.

A Golden Hills resident inquired if Assembly Bill 1054 will raise utility rates and, if it does, will it decrease the probability of outages. Grove responded that the utilities are the only entities that control outages; AB1054 is not related to outages. The bill will authorize the PUC to be able to exercise rate-making and rule-making over the utility companies.

Senator Grove concluded the town hall by noting that SCE is still examining and implementing solutions. The company has had to dramatically shift almost every facet of its operations over the past two years. Another community meeting will be held in Tehachapi in a few months, with further updates.

Emergency Preparedness resources may be found online at sce.com/safety/family/emergency-tips.