'The Trip to Bountiful' opens Feb. 21 at the BeeKay Theatre 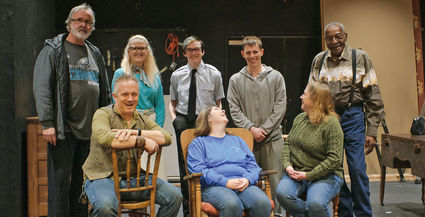 TCT kicks off 2020 with Horton Foote's moving play, "The Trip to Bountiful." Directed by TCT veteran David SteeleReed, this heartfelt 1950s drama tells the story of Carrie Watts, an elderly woman, who longs to escape the cramped Houston apartment where she lives with her protective son, Ludie, and her authoritarian daughter-in-law, Jessie Mae. In an act of defiance, Carrie makes her getaway to return to her beloved hometown of Bountiful, Texas. Along her daring journey, she makes a young friend, charms the cops and soon learns that her cherished little town isn't the same as she remembered it.

Fun facts about this play: "The Trip to Bountiful" was originally produced for TV (starring Lillian Gish) before premiering on Broadway in 1953. The 1985 film brought an Academy Award for Geraldine Page. Horton Foote's daughter, Hallie, played Jessie Mae on Broadway in a 2005 revival.

Fun facts about this TCT production: David SteeleReed, longtime TCT contributor, is not only directing the show but also will be on stage portraying Ludie. Other cast members include D.D. Stoller as Carrie, newcomer Lisa Whitcomb as Jessie Mae, Lanie Ringle as Thelma, Lewis Brown as Roy, David Shacklock as the Sheriff and Adam Dyer and Thomas Ingram as the Houston ticket agents.

A message to our Tehachapi audience from Director/Actor David SteeleReed, "The cast and crew are excited to bring Horton Foote's heartfelt play about what defines 'home' to life on the BeeKay stage! With its well written characters and simple, stripped down storytelling, this show is a natural to share with you."

"The Trip to Bountiful," rated G, opens Friday, Feb. 21 and plays for three consecutive weekends with matinees on Sunday, March 1, and Sunday, March 8, at 2 p.m. Tickets are $18 and are available at Tehachapi Furniture and Tehachapi Treasure Trove or online at http://www.tctonstage.com.