Best of Show winner Todd Sherwood and his wife and model, Kelly Sherwood.

Top honors including the Best of Show award for the 15th annual Winter Photo Contest at Gallery 'N' Gifts went to Todd Sherwood. Todd's photo was chosen by a panel of judges from a field of a little over 100 entries in seven different subject categories.

Todd took his photo in an area of Nevada known as the Valley of Fire. "I actually saw the image possibility the day before and knew I wanted to shoot the location as the sun rose the next day." Returning the next morning before dawn, he and his wife Kelly proceeded to photograph all during the one hour or so that the sun was rising. "Every minute during this hour the warmth of the light, and the changing shadow patterns, are just amazing," said Todd. This time frame is known to most photographers as "Magic Hour."

"Kelly and I travel in our motor home as often as possible seeking out areas that are photographically interesting to visit," said Todd. Their travels have also taken them outside the country. A few years ago, after returning home, Todd entered and won Best of Show for a haunting image he had taken at Auschwitz.

"Using my wife Kelly as my model I shot this year's winning photo with my Cannon EOS 7 Mark 2 camera using a Cannon 70-210 Zoom. I do all of my own printing; I recently purchased a Cannon Pro 4000 printer. Canvas and luster paper prints up to 40 by 60 inches are possible and I'm a big fan of printing with pigment inks."

Todd also took First Place in this month's contest in the category of Landscape/Nature for his print of "Peek-a-Boo Canyon."

His and all the other entries will be on display at Gallery 'N' Gifts, located at 100 W. Tehachapi Blvd. in Tehachapi, until the end of February. They hold photo contests twice a year, with the next contest scheduled for August. 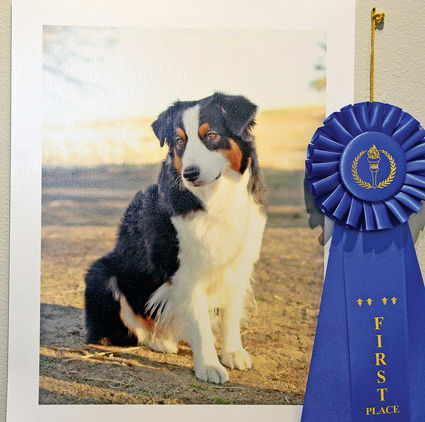