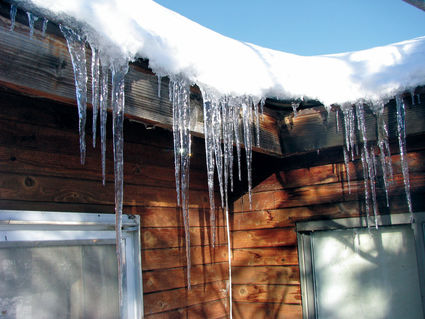 Icicles add such sculpted beauty to the ordinary eve of a house.

Small footsteps crunch on the surface of the snow. The young face looks up at the house, and a little hand reaches skyward. A larger hand stretches towards the eaves, breaks off a thin tapering spike of ice and gives it to the smiling child, who promptly starts eating it. Our affection for icicles starts at an early age.

Icicles, nature's water-flavored popsicles, are actually quite rare in natural world, but are common among human habitation in colder climates. Icicles typically form on steep surfaces as just a little bit of snow melts, either from sunshine or escaping heat, when the overall air temperature is still below freezing. This briefly-liquid water trickles downhill, and when it reaches a drip edge, such as the eave of a house, it forms a droplet and re-freezes.

A thin film of water continues to descend down the icicle and then freeze again, growing the icicle into the carrot-shaped ice spikes familiar to kids who grew up in Tehachapi or other places with freezing winter temperatures. These ice jewels hang down like glass prisms dangling from a chandelier.

The reason that icicles are uncommon in nature is because they only form under fairly specific conditions. First you have to have freezing cold air temperatures, but then you also need liquid water, which isn't usually associated with freezing conditions. Lastly, you need a steep surface where gravity can work its magic -- there are no icicles on flat surfaces like prairies and parking lots.

The reason that houses and other buildings produce icicles so well is that following a snowstorm, when the inhabitants stoke their wood stoves or turn up the thermostat, escaping heat warms the underside of the snow cover just enough to melt a little of it. This water then heads down the roof to the eaves, gets refrozen and viola! Icicles.

With their natural tendency to heat their homes when the weather is very cold, people in northern climates have been unintentionally creating icicles for thousands of years.

Even houses that are very well insulated can produce good icicles, if bright sunlight on a sub-freezing day warms the roof enough to turn some snow back into water.

Though icicles are a common sight in colder locations, they haven't been studied very much and aren't thoroughly understood. It was only in 2014 that Professor Stephen Morris and Dr. Antony Chen of the University of Toronto determined that the ripples or ribbing found on many icicles is the result of impurities in the water in the form of trace salts like sodium or calcium.

When the two scientists grew icicles under laboratory conditions using distilled water, no ripples ever formed. The icicles remained smooth. But even tiny amounts of salts, less than are found in tap water, were enough to create the ringed ridges. These ripples form one centimeter (.39 inch) apart, regardless of the size of the icicle. The wavelength, or distance from ridge to ridge, remains the same.

Icicles in Tehachapi usually form on the day after it has stopped snowing. Icicles can last for a few days and keep growing, provided temperatures don't warm up too much during the daytime. 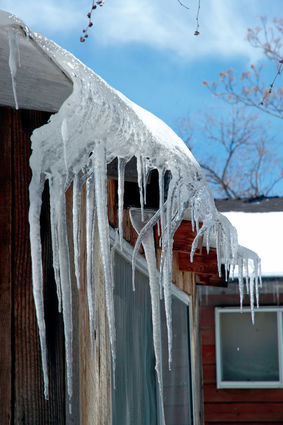 These icicles formed, and then the snow cover slid down the roof a little, resulting in the icicles forming a bend.

Icicles don't generally get big enough to be threatening in the Tehachapi Mountains, but in places with long, frigid winters and lots of tall, inefficient old buildings, enough ice can build up to be dangerous when it plummets to the ground below.

In our Southern California mountains, however, icicles are mostly an ephemeral touch of winter, decorating our houses with glistening tapers of ice that only last for a day or two. I love the look of their inverted spire geometry. And I still like the icy clean, wintry taste of a delicate icicle plucked from an eave. . . .