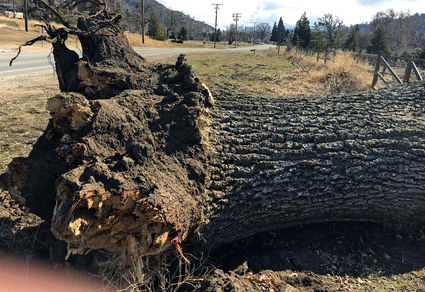 January saw a meeting regarding fish planting in our water holes. Several fish were caught in Jack's Hole and released into Four-Island Lake. Currently catfish tend to make up the majority of the population. The advisory committee looked into stocking bass but none were available, but had they been, they would have been $10 for each 4-inch-long fish. The second biggest population of fish were the crappie, followed by a few bass and blue gill.

The youth soccer league starts March 27 and ends May 30 but registration is right now. Practices start March 16. Call for current prices. This is open to youth ages 7 to 14. See E-Buzz for more details.

Many of you are aware of the huge oak tree that uprooted at Bear Valley Road and Sutter, barely missing a private home but badly messing up their fence. There was some question about it being on CSD right-of-way and possible liability but the owners of the home have decided to harvest the firewood and will take care of the fence at a later date.

The cattle have arrived and the Greenhorns are back at it for another season. Cattle sessions are held every Tuesday at 4 p.m. and 5:45 p.m. and Saturdays at 9 a.m. and 10:45 a.m. New this year is a Ranch Horsemanship Clinic on the second Saturday of every month with instructor Brad Lundberg.

Bear Valley Springs is a private gated community in which the residents pay an annual association amenities fee. To participate in the above events, a non-member or non-resident must arrange with a friend or family member in the community for a guest pass that would permit them to engage in the activities. Guest passes will be checked.