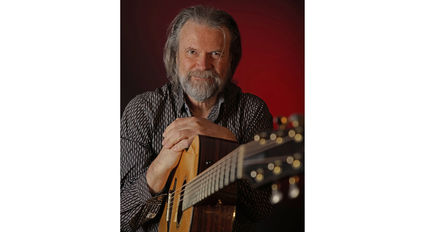 It may be named "Fiddlers Crossing," but the small venue in Downtown Tehachapi also features some of the world's finest acoustic guitarists in its concert schedules. On Friday, Feb. 7, the audience will be treated to a touch of Italy when Beppe Gambetta returns to the stage.

Gambetta is considered one of the finest flatpicking guitarists on any continent, playing, according to Acoustic Guitar magazine, a "virtual United Nations of influences: Italian, Ukrainian, Appalachian, Sardinian, Celtic."

Born in Genoa, Italy, Gambetta fell in love with American Roots music when he first heard Doc Watson play. He began his career playing in a classical orchestra for plectrum instruments, but crossed over to American music when he founded the Italian Bluegrass band, Red Wine. In 1988 he launched his solo career. After 11 CDs, several instructional DVDs on the Homespun label, as well as teaching books, he has become known as one of the true master innovators of the acoustic guitar.

Gambetta still lives in his native Genoa, but spends part of the year in North America. He has played numerous festivals, and in prestigious halls such as the Metropolitan Museum of Art in New York. He has appeared on "All Things Considered" and other radio shows, and has collaborated with many other top-flight musicians such as Tony Trishka, Dan Crary and Tony McManus.

In his guitar technique there are echoes of Doc Watson as well as Moravian and other folk music. Gambetta incorporates intricate cross-picking patterns, open tunings and fluid slides up and down the neck of the guitar.

In his concerts, Gambetta alternates his flashy guitar pieces with songs in Italian or English. He brings to his playing and singing an intimate sense of emotions, along with his Italian charm and humor. He doesn't rely solely on his high-level of technical excellence, but is not afraid to show his innermost feelings in a playful way, always exploring and innovating while staying firmly rooted in musical tradition.

Fiddlers Crossing is located at 206 E. F St. at Robinson St., in Downtown Tehachapi. Tickets may be purchased at Tehachapi Treasure Trove, Tehachapi Furniture in Old Town, Lucky's Barbershop, at Fiddlers Crossing during Wednesday night open mics or online at http://www.fiddlerscrossing.com. To make reservations, call (661) 823-9994. Tickets to the concert are $20, and as always, coffee and goodies are included. The concert begins at 7 p.m. Doors open at 6:30 p.m.

On the horizon, The String Revolution, Grant Maloy Smith, and John Batdorf.