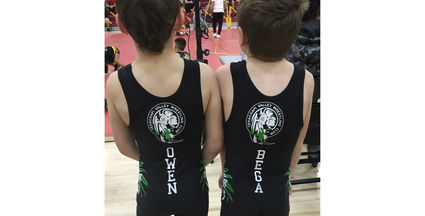 The Tehachapi VALLEY WRESTLING CLUB placed third as a team at the Shooting Stars Tournament Jan. 19 at North High School.

"With only 11 wrestlers competing and missing some of our stronger kids, I was very happy," said Head Coach Curtis Nelson.

Owen Schneider was the only third to fifth grade wrestler competing and placed third in his 58-pound class. Middle school wrestler Evan Lutgen finished his day with a third place medal and Ella Schneider, the only girl competing at 89 pounds, finished seventh.

Marcus Coates at 49 pounds and Gabriel Mesa at 52 pounds, battled hard in their K-2 brackets to earn a fourth place finish. Other wrestlers competing and helping the team earn some team points were K-2 wrestlers Liam Parker at 49 pounds and Noe Mesa at 52 pounds. TVWC will be busy on the mat every weekend until end of season with KCWA Folkstyle Championships on Feb. 23. TVWC would also like to thank everyone who supported our spaghetti all-you-can-eat dinner on Jan. 15.

Tehachapi VALLEY WRESTLING CLUB had a busy weekend competing both Jan. 25 and 26.

TVWC attended the Middle School Dinuba Invitational on Jan. 25 with only three team members. Levi Hart finished the day strong with a third place win (8-0) over the same opponent he lost to in quarter-finals 6-4. "Levi showed that he could refocus and wrestle to his abilities after a tough loss," said Coach Curtis Nelson. Other wrestlers competing were first year wrestlers, Jovanni Martinez and Evan Lutgen who both went 2-2 in their 32-man brackets. Jovanni Martinez, 153 pounds, started his day with two quick pins, but then lost out to eventual placers. Evan Lutgen, 83 pounds, had some tough competitors to contend with but wrestled competively.

Gabriel Cordova wrestled in the 4-5 grade, 58-64 pounds division and ended his day with seventh. "The kids are getting a lot of mat time locally and that's how they will improve," said Coach Marcus Coates.