On winter nights the ancient ones awaken: The magic of Nuwä storytelling 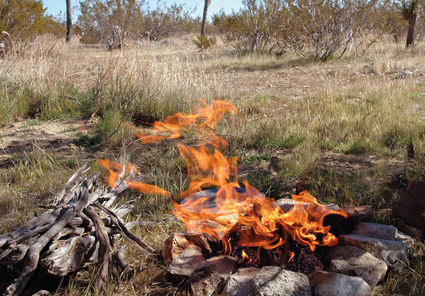 Short, cold days and long frosty nights. When the sun went down, the land grew dark. There were no lights anywhere, except the occasional flickering glow of a small campfire. The stars overhead glittered in the black sky. The nights were quiet, but not silent. Coyotes could often be heard as they yipped and barked, and sometimes wolves would raise their muzzles towards the sky and their mournful, descending wails would echo from the hills.

This is the time of year in the Tehachapi Mountains when the Nuwä (Kawaiisu or Paiute) Indian people traditionally told their stories. Through the uncounted centuries, a thousand winters came and went. And then another thousand.

Storytelling was traditionally a winter activity, and those who told stories in summer risked being bitten by a rattlesnake. The storyteller might follow the custom of jumping into cold water the next day, since rattlesnakes were believed to avoid water, except in late summer. Storytellers could be men or women, and the listeners were everyone else, from little children to elders.

Some tales had humor, others explained the natural world, a few were chilling, all were wondrous. They mostly involved animal-people from an earlier, mystical time. These beings represented different animals and their traits, but they also spoke and were often human-like at the time the stories took place. "It is generally conceded that the animal-people eventually became animals in habits and appearance," noted Dr. Maurice Zigmond, who started interviewing Nuwä elders in the 1930s. Clara Girado Williams told Zigmond "That's the way those people were – like people until they were frightened and then they turned into animals."

Some of the stories told of a giant creature similar to the Bigfoot of legend, who walked upright like a man and stole children who misbehaved. His name was Haaka-pa-neez. Children were reluctant to go outside at night by themselves because elders warned them that Haaka-pa-neez might get them.

Haaka-pa-neez at the Pinyon Camp

A family went to camp in the mountains in autumn to gather tuva (pine nuts) from pinyon pine trees. At night one little boy wouldn't go to bed when his parents told him it was time. His parents warned him, "You'd better get in bed and go to sleep, or Haaka-pa-neez is going to get you." But the little boy answered back, "There is no Haaka-pa-neez," and he kept on playing.

Haaka-pa-neez heard the little boy as he played and came and grabbed him, stuffing the boy in a sack he carried on his back.

Haaka-pa-neez continued on walking and singing and didn't notice that the boy had escaped. The little boy dropped down from the pine tree and ran back to his family's camp. They had found him missing and were scared and looking for him.

The little boy said, "I didn't think I would ever see you again," and he was so happy and relieved to be back with his family. He went to bed and after that he went to sleep whenever he was told.

One day Coyote was walking through the woods. He was passing a tree when he heard someone whistle and call his name. "Sina'av! Sina'av!" He looked around, but he couldn't see anybody. "Who knows my name?" he asked. No one answered.

He went a little farther and the same thing happened again. Finally he looked up into a tree and saw Sanapi – pitch. Coyote asked "How do you know my name?" Sanapi said, "I know it." Coyote said, "Come down or I'll kill you." Sanapi said, "This is my place."

Coyote shot him with all his arrows but could not kill him. Coyote kept getting madder and hit pitch with his bow but that didn't hurt Sanapi. Finally Coyote climbed up in the tree and hit Sanapi with one paw. It stuck and he couldn't get free. He hit him with his other paw. It stuck too, so he kicked him with both feet. They stuck. Then he bit Sanapi and his teeth stuck. Coyote couldn't move. He had to stay there and died.

There is a spirit or ghost trail called unupi-toov where the spirits of the dead walk at night. It comes from the Piute Mountain area into Kelso Valley and then into the desert over Mustang Canyon. In the evening the ghosts come from the east to the west and then, just before dawn, they return eastward and you can feel the warm air as they pass.

There were certain practices that could affect winter weather. Emma Williams' great-grandfather told her, "When you see a new moon in winter, take a small stick and break it in the direction of the moon. This will shorten the long winter months, but only an elder is able to do this." 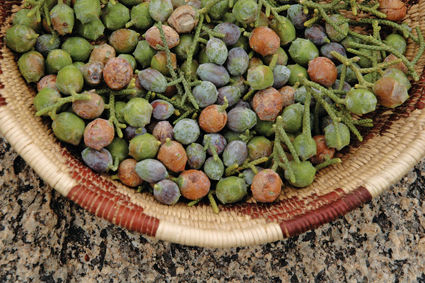 And blowing on the soft fur of a rabbitskin could bring precipitation. One elder remembered that when she was a child, she and other children were blowing on a rabbitskin which they held between their hands. Her grandmother warned her that this would bring snow. The next morning there was snow on the ground.

The wilderness world that the Nuwä inhabited was full of animals, both real and supernatural. On winter nights, the storytellers brought them all to life and used words to paint pictures in the minds of the listeners. Once again, the ancient tales were awakened.