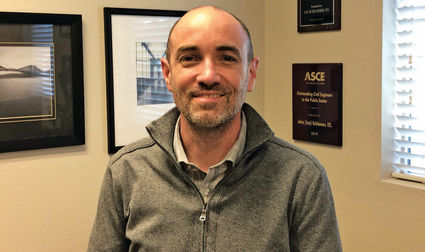 On Tuesday, Jan. 14, 2020, Tehachapi's Development Services Director Jay Schlosser received word that he had been awarded the 2019 Outstanding Civil Engineer in the Public Sector for Region 9 (State of California) from the American Society of Civil Engineers (ASCE). This is a huge honor for Schlosser who had won the award for the San Joaquin Valley in July and Los Angeles Section last September before moving on to the Regional level. The ASCE is made up of 10 regions and has over 100,000 members worldwide. Nine regions are located within the United States and the tenth encompasses the rest of the world.

Schlosser will receive his award at an ASCE Regional dinner on April 3 in Sacramento. He will then compete with nine other engineers for the National Engineer award of the year. "I didn't think I would get it," said Schlosser, "There are so many others who definitely qualify. It is so nice to be honored by your peers - the people who know what you do."

"I was surprised but not shocked Jay won the award, he has such high standards for himself and is an outstanding leader for his team here at the City of Tehachapi," said Greg Garrett, City Manager.

This will be the second Regional award for the City of Tehachapi. In 2017 Tehachapi won the 2017 Small Project of the Year for the development of Freedom Plaza. That project was produced by Schlosser's department.