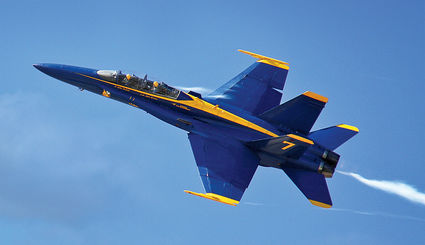 On Jan. 14 the press was invited to see the distinctive F/A-18 Hornet from the US Navy Blue Angels Aerial Demo Team fly into General William J. Fox Airfield in Lancaster, Calif. Lieutenant Commander Adam Kerrick, event coordinator, and Lieutenant Julius Bratton, air show narrator, flew in the F-18 and told us in the press meeting that this would be their first Air Show on the road.

The Navy F-18 Air Crew told us that they love the weather in Lancaster. The pilots and crews are currently working hard back in El Centro, Calif., practicing for the March 2020 Air Show. El Centro is the Blue Angels' winter home because of the fantastic weather for aviation there.

At the LA County Air Show, March 21-22, the Blue Angels will be performing with other headliners including the US Air Force F-22 Raptor Demo Team and Tora! Tora! Tora! Demo Team. A Mig-17, piloted by Jason Somes, will also be performing, as well as a U2 spy plane from NASA.

Lockheed Martin is the title sponsor for this year's Air Show. The theme is "Aerospace Valley, USA." For more information visit lacountyairshow.com.