One of my favorite airplanes – the Lockheed Constellation 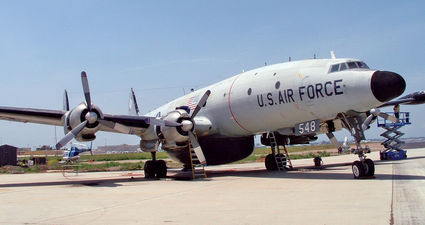 The Lockheed Constellation will always be one of my favorite airplanes, for it was one of those beautifully polished silver birds, with TWA colors, that brought me to California from Columbus, Ohio back in 1951.

This classic aircraft design originated in 1939 as an elegant passenger airliner. Pan American Airways and Transcontinental and Western Air (TWA) wanted an airplane that was faster, more powerful and had longer range. Los Angeles to New York, non-stop, was the goal.

Kelly Johnson and his design team came up with a proposal in a record-breaking short time. They incorporated many ideas that already were proven in Lockheed aircraft. They included the plan form and airfoil of the P-38's wing and the Lockheed-Fowler flap arrangement that provided high lift, high speed characteristics and shorter take off and landing capabilities.

The Constellation featured passenger comfort with a pressurized cabin, complete lavatory, coatroom and galley. Top speed with a full load of fuel and 64 passengers, was 340 mph.

Howard Hughes, owner of TWA and the Hughes Tool Company, paid for the first Constellations because TWA was nearly broke.

The first flight was January 9, 1943 and the military pressed the Constellation into service with the U.S. Army Air Corps and designated it as an L-49. The first Constellations designated as C-69s were utilized as command ships, personnel transports and cargo planes.

Instead of a single tall vertical tail, three tails were incorporated into the design in order to make the aircraft easier to fit into lower hangars.

The first Constellation was delivered to Wright Field in Dayton, Ohio for the Army Air Corps for testing in July 1943. In 1944, Orville Wright took a flight in a "Connie" in the co-pilot's position (right seat). It was his first flight in 25 years and his last flight before he passed away in 1948.

In 1947, the U.S. military created the U.S. Air Force and ten of Lockheed's new Model 749, with an extended range and top speed on 350 mph, were purchased and given the Air Force designation of C-121.

The U.S. Navy used Super Constellations as the first Airborne Warning and Control aircraft (AWACS), with a giant radome antenna mounted on top of the fuselage like a flying saucer. The designation of WV-2 "Warning Star" was given to 142 of the early warning radar platform aircraft. After entering service in 1955, the Navy retired the last electronic reconnaissance "Connie" in June 1982 after it served honorably in Vietnam.

Nearly ten years ago, I visited Camarillo Airport with my son Mark Burdick and saw the Lockheed Constellation EC-121T, serial number 53-0548 that Yank's Air Museum in Chino, Calif., had purchased.

This aircraft was originally built as an RC-121D, but was converted from Airborne Early Warning to Electronic Reconnaissance. She served with the U.S. Air Force and was retired in 1981 and stored at Pima, Ariz.

Many EC-121s served with the 552nd Airborne Early Warning and Control (AEW&C) Wing, College Eye Task Force, Southeast Asia from the period April 1965 to May 1974. From 1953 through the 1970s, the United States Air Force Aerospace Defense Command's (ADC) 552nd Airborne Early Warning and Control Wing was located at McClellan Air Force Base in Sacramento, Calif.

They flew the then ultra-sophisticated, electronic-laden Lockheed Constellation EC-121D prop-driven aircraft. Their primary mission was to provide early warning of enemy aircraft trying to penetrate the U.S. Western Coast Air Defense Identification Zone (ADIZ). As a secondary mission they were responsible for controlling the interception of enemy aircraft by friendly interceptors.

Like many post-World War II naval aircraft, the Constellation served beyond the VietNam era. The last electronic reconnaissance "Connie" was retired by the U.S. Navy in June 1982.

Lockheed Constellation on final for landing.

Air Force C-121s participated in "Operation Vittles" during the Berlin Airlift in 1948. They flew over 5.9 million miles carrying personnel and cargo to Berlin from Westover Air Force Base in Massachusetts.

Two of the Air Force planes became famous. One was General Douglas MacArthur's personal Command ship named "Bataan." The other Connie was used by General Dwight D. Eisenhower when he served as NATO Commander. The plane carried the name "Columbine" and it is on display at the U.S. Air Force Museum at Wright Field in Dayton, Ohio today.

The Lockheed Constellation will always be one of my favorite airplanes; I was smitten when I first saw one in 1951 at the age of seven.