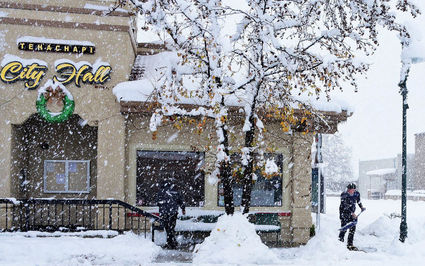 With city work crews stretched to the max during the long uninterrupted snow fall on Dec. 26, Tehachapi City Manager Greg Garrett took up a snow shovel to help keep side walks clear so local residents could have access to City Hall services.

Newer Tehachapi residents who have wondered what it was like back in the old days, when there used to be more snow, don't have to wonder any more: our snowstorm on December 26 was like the winter storms that used to be a yearly occurrence.

In fact, the speed of this snowfall would be exceptional during any year, past or present – we went from having no snow at all to having a foot and a half in less than 24 hours. Even in previous decades when we routinely got more snow, it would typically take a couple of storms in quick succession to build up this much snow. We're five days past the storm as I write this and many of us in the outlying areas still can't use our driveways or access all of our property.

Highway 58 was closed for about 36 hours, and even when it reopened traffic was still slow headed eastbound the following day. This closure kept some Tehachapi residents from being able to get home, and required many Christmas visitors to extend their stay, since roads out of here weren't open.

Tehachapi kids loved having a big snowstorm to play in, but of course they were already on their winter break so they weren't able to use the snow to get some time off school. This was a great blessing for school officials, who would have had to deal with closures and delays for days after the storm, as well as for parents who would have had to struggle to get kids to school or make child care arrangements unexpectedly.

The heavy snow broke tree limbs (and entire trees) throughout the City of Tehachapi and in all the outlying areas. It was the worst treebreaker storm I've ever seen in my lifetime. The cleanup of all those broken branches will take weeks or months.

It was initially overcast and gray after the storm, but by Saturday, Dec. 28, the sun was shining and the sky was the brilliant blue that follows a cleansing snowstorm. The air right after snowstorms is the clearest and cleanest of the year.

The sunshine and snow-covered landscape enticed travelers to stop and enjoy it, and brought up families from the San Joaquin Valley and other lower elevations for snow play. The vacant level area in front of Home Depot, as well as over by the Caltrans materials yard at the Tehachapi Blvd. exit of Highway 58, have both become impromptu snow play areas, which seems easier for everyone than having people unfamiliar with the area driving around on icy roads trying to find some place to play in the snow.

State, county, city and CSD road crews worked long hours to get the main roads passable, and despite all the snow and ice hazards, as well as broken trees, I'm not aware of any traffic fatalities or even serious injuries locally as a result of snow that drifted two feet high in places.

The Great Day After Christmas Storm of 2019 has been beautiful to experience, despite the inconveniences and damaged trees. Seeing our local mountains blanketed in snow day after day, instead of melting away in hours, just feels like it is supposed to, for those of us who remember the harsher winters we used to have.

Snow itself is an amazing substance, and as you're struggling to walk through snow up to your knees, or working hard to shovel driveways and walkways, or having your vehicle get stuck in snow, it seems incredible that it's simply water in a strange, frozen form. And when temperatures warm up, even just into the upper 40s, it all turns back into water again and vanishes. Until the next cold winter storm fills the air with snowflakes. . . 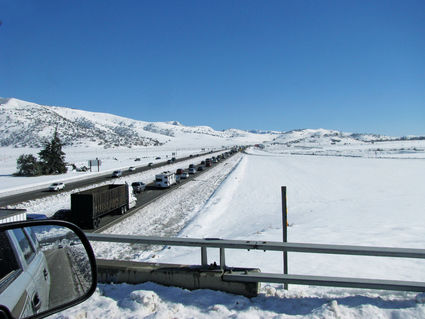 Even two days after the storm, eastbound traffic was still moving slowly on Highway 58.