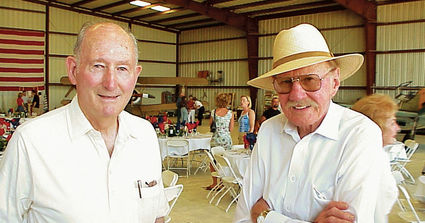 I want to share a photo of Fitz Fulton and Bob Hoover that was taken by Mike Owen at the retirement party held for Dan Sabovich in 2002. These two men, Fitzhugh Fulton and Bob Hoover, are decorated veterans of World War II and Korea and were participants in legendary flight test work with the U.S. Air Force.

I love the photos we have of the many illustrious test pilots that have flown in the skies over Edwards AFB, California City, Boron, North Edwards, Rosamond, Lancaster, Palmdale and Mojave. We do live in the most exciting flight test area in the world!

At Edwards AFB, for nearly 12 of his 20 years in the Air Force, Fulton was project pilot on nine B-58 Hustler bomber test programs.

He also flew the B-29 and B-50 Superforts used in launching the Pioneer X-1 and X-2 experimental rocket planes.

I could go on and on about our friend Fitz Fulton and the exciting programs he participated in, but as he used to tell anyone who expressed the idea that he was a real hero, he would simply reply, "I didn't do anything special; I was just doing my job."

Seeing the photo of Fitz reminded me that he was one of the pilots of the XB-70 Valkyrie; and it was thrilling to see that sleek majestic white bird sail across the blue sky.

Fitz was the pilot of the XB-70 Valkyrie on its last flight from Edwards AFB in Calif. to Wright-Patterson AFB in Ohio on Feb. 4, 1969. I know I have mentioned it before, but Fitz was a friend of my Dad, M. G. "Speed" Hellwig, and he sent a Commemorative First Flight XB-70A envelope from Dayton after the last flight. (See photo.) He crossed out 'First' and wrote 'Last.'

After the Soviet Union detonated their first hydrogen bomb in 1954, the U. S. Air Force and the Strategic Air Command issued a challenge to aircraft manufacturers stipulating a design that would combine a huge payload and long range, plus supersonic Mach 3 speed.

North American Aviation and Boeing submitted design contracts. The U.S. Air Force wanted new technology advances, so research and development of the XB-70 actually began in 1955 and this aircraft was supposed to replace the B-52.

The Air Force requirement was for a Mach 3, high-altitude, long-range bomber capable of carrying nuclear and conventional weapons and North American Rockwell won the contract.

The XB-70 had a long fuselage with a canard or horizontal stabilizer mounted just behind the crew compartment. The XB-70 had a length of 196 feet, a height at the tail of 31 feet, and an estimated maximum gross weight of 521,000 pounds. It had a crew of four: pilot, copilot, bombardier, and defensive systems operator.

The delta wing had a span of 105 feet with six General Electric turbojet engines (J93-GE 3), each in the 30,000-lb thrust class, with two large rectangular inlet ducts providing two-dimensional airflow, side by side in a large pod underneath the fuselage.

The GE J-93 was first tested in the Convair B-58 Hustler and two J-93s were chosen to power North American's F-108 Rapier, which was one of those aircraft designs that remained on the drawing board.

The wing was swept at about 65.5 degrees, and the wing tips were folded down hydraulically 25 degrees in flight and to 65 degrees to improve lateral-directional stability at the aircraft's supersonic speeds of up to Mach 3. 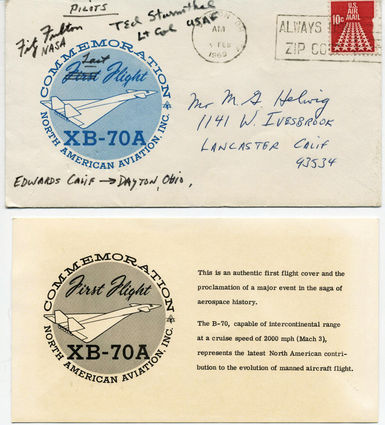 At Mach 3 the Valkyrie was designed to ride its own shock wave. The large canard near the front of the fuselage had a span of 28 feet, 10-inches and was used for stability. In addition to its sharply swept delta wings, the XB-70s had two large vertical tails. The airplane had two windshields: a moveable outer windshield was raised for high-speed flight to reduce drag and lowered for greater visibility during take off and landing.

Data collected during the flight testing of the B-70 was to be used for an SST (Supersonic Transport) that was unfortunately never developed by the U.S.

The Valkyrie was designed, built and flown to protect America's freedom and keep the peace. I am reminded of a quote by President Theodore Roosevelt, founder of the Navy League of the United States: "Peace, like freedom is not a gift that tarries long in the hands of cowards, or those too feeble or short-sighted to deserve it."