Diversity Buddies, a gift for everyone! 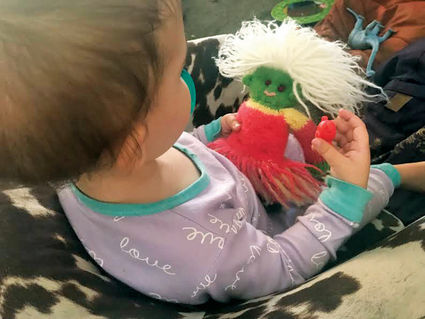 For the last several months, Andi Hicks has been knitting "diversity dolls." The "Buddies," as she calls them, are doing much more than sharing hugs and cuddles.

It all started when Andi's friend Judith Campanaro showed her some dolls she had made. Judith called them "Cuddle Hugs." Andi thought her grandson would like the dolls and asked Judith for the pattern.

Andi said, "Judith gave me the pattern on one of the windiest days of the year when she was getting on the bus to go to Bakersfield. She handed me the pattern and the wind took it and threw the pages all over the parking lot at Ride and Share. It took me two days to put them in the right order. The pages were all mixed up and I had to try to figure out which pages went to the little girl and which pages went to the little boy. After the frustration of getting that done I bought some yarn. It had to be 100 percent wool because the dolls were going to be felted. I made my first doll. It was hard to figure out how to make the little noses and the ears, but Judith helped me. I made my first Buddy and gave him to my grandson. Then I thought how am I going to know if he wants a girl or a boy? So, I made him another one and now he has both. The dolls are cute, they're ugly and adorable at the same time. Each one is unique and come in all colors. I made 24 more Buddies."

Accompanied by her grandson, Andi took her Buddies to his preschool. There was a doll for each child and extra dolls for their teachers. The children got to pick their own Buddy.

"They all seemed to know exactly which Buddy they wanted," Andi said.

Andi explained to the students that the dolls are all completely different, and just like each child – special. The teacher told the class to take their dolls home, give them a name and bring them back in a week to visit with their friends. The children came back with lots of stories to share about their very own Buddy. Because their new friends were all so different and unique they soon became diversity dolls. The kids could beat them up and hug them up and they loved sharing the stories about their "Buddies."

"I've been knitting these silly little dolls 'til I'm crazy," said Andi. "People see me now and say is that all you do is knit? Well, no. The thing that makes these dolls most special to me is that after you make them you have to throw them in the washing machine and felt them in hot water. They are churned up and beat up and then they come out in a different form. They look cute when they're just knitted but they look adorable after they're felted. I give each one a kiss before I throw it in the washing machine and I say, 'ok now you're going to have a real life experience and when you come back you're going to be able to share that with your new human friend.' Some of them have eyes, some have noses and eyes some of them have smiles or not, some of them are grumpy. My daughter asked me how come I don't make smiles and I said because I'd like the people who own them to know that their Buddies have feelings and they're not always smiling. One of my grandson's dolls doesn't have a smile and he said that's the quiet one."

Andi would love to get others who like to knit to create more Buddies. 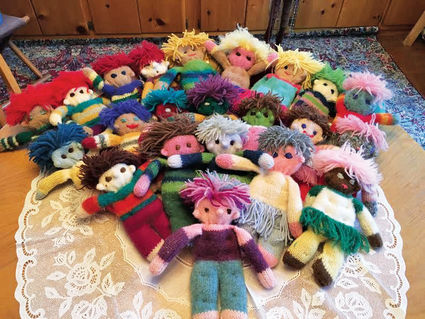 "We could make adorable groups of Buddies," Andi said. "They need to go as a group to have real impact. Since going to the preschool I've given them out to friends. Even adults love Buddies. They are cross generational. Their diversity goes all over the map and are loved by all ages. My grandson has four. He asked me if he could cut the hair on one. At 3 years old, he managed a pair of scissors and did a great job. A Buddy is a great teaching tool. They spread love to all ages."

Andi's Buddies are a gift to the community and knitting diversity dolls for charity is a wonderful idea. They can be shared in classrooms, hospitals, senior centers and special needs programs. Their diversity and reach is unlimited. If anyone is interested in joining Andi's vision, feel free to contact her at andiehicks@gmail.com or Judith Campanaro at judithcampanaro@gmail.com. Let's start a group and share the patterns.