Sometimes lenticular clouds are epic and dominate the skies over Tehachapi.

While headed out to Cummings Valley with friends late on Tuesday afternoon, Dec. 17, in the fading light we saw a huge lenticular cloud with a large completely circular hole in the middle of it. It looked like a giant round spacecraft had either gone up into the cloud, or come out of it.

Happily, neither was the case and no alien abductions were reported. However, lenticular clouds are often described as "flying saucer-shaped" and the word lenticular itself means "lens-shaped" and refers to the fact that these clouds often have a rounded, concave or convex appearance.

Tehachapi residents often get out their cameras to photograph lenticular clouds because they can form shapes unlike any other clouds – they can resemble a stack of pancakes, a guitar body, a baguette, an upside down wedding cake, and many other fanciful creations.

The technical term for these clouds is altocumulous standing lenticularis (ACSL), and they typically form between 8,000 and 20,000 feet in the air. These clouds are generally not associated with rain, since they tend to form when there is a strong horizontal air flow with drier conditions and more stable air. Oldtimers often called them "wind clouds" since they do indicate high winds aloft.

There are generally two conditions that must be met for lenticular clouds to form: there must be some relatively fast-moving, stable air, and there must be some kind of large barrier to push it upwards – so basically wind and mountains, and the Tehachapi area has a dependable source of both.

So the stable air is pushed along horizontally, then encounters a land mass positioned perpendicular to the direction the wind is blowing, so the air is forced upwards. The mountains form a barrier that obstructs the upward-streaming winds, and so a "standing wave" or "gravity wave" appears downwind in the lee of the mountains. This is why major mountain ranges of the world, like the Rockies, Alps and Himalayas are often associated with the formation of lenticular clouds. There does have to be some moisture present for the lenticulars to appear, and they often hover over mountain peaks like a beret or a newsboy cap.

The size of the mountains helps determine the size of the lenticular cloud. Tehachapi has some high profile mountains, like Bear Mountain, which rises up dramatically from the San Joaquin Valley floor, so we get some epic lenticulars. Paul Hudson, a BBC weather presenter and climate correspondent, has noted that "The bigger the hill or mountain range the air travels across, the more spectacular the lenticular cloud." If you see lenticulars over some fairly level terrain, it means they must have traveled some distance from the mountains where they formed, because flat ground doesn't produce lenticulars.

The most deceptive feature of lenticulars (since they don't actually hide human-abducting aliens) is the fact that while they appear to be very stable, almost motionless clouds, they are actually forming and dissipating in front of your eyes – so one of the most stationary, inert-looking clouds is in truth one of the most dynamic, unstable of cloud formations.

Lenticular clouds are seen most often in the winter or spring because that's when upper levels winds tend to be strongest. Powered aircraft tend to avoid lenticulars because of the violent turbulence associated with them, but sailplane pilots like those who fly out of Mountain Valley Airport in the eastern Tehachapi Valley know that with caution they can use the tremendous lift found in the vicinity of these gorgeous clouds. Many sailplane records were set by pilots who took advantage of the wave effect that creates lenticulars. 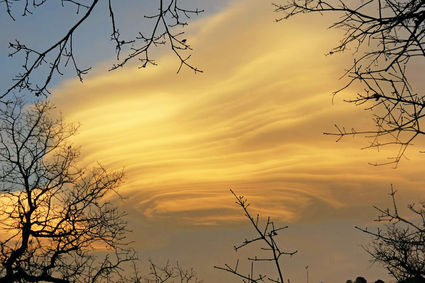 Kerri Esten took this photograph of a lenticular as it began to get sunset color late in the day.

Tuesday's spectacular lenticular owed its layered effect to the presence of moisture – air masses coming off a mountain barrier can be quite stratified based on moisture content, with the driest air at the top, and clouds are formed at each layer where the air is saturated with moisture. Lenticulars that form out of drier air have a smoother appearance with much less layering.

I hope you got to see Tuesday's lenticular with the hole in the center, but if not, you won't have to wait too long for the next unusual one to appear – our peaks and ridges produce these remarkable clouds on a regular basis.