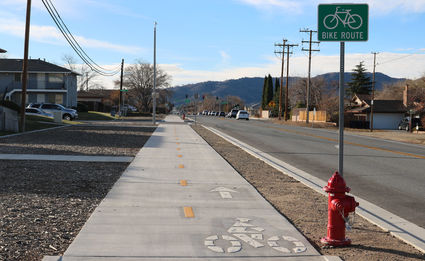 Above is a photo of the Valley Blvd. Bikeway, a project designed and completed with an Active Transporation Program grant.

The Development Services Department of the City of Tehachapi is asking for public input into the Active Transportation Program grant proposal(s) they plan to submit to the State of California by the middle of 2020. Proposals must be for non-motorized projects within the city limits of Tehachapi, for example, sidewalks, walking paths, bike paths, etc.

This will be the fifth cycle of ATP grants since their inception in 2013 with the passage of AB101 and SB99. Until the passage of California SB1 (the gas tax), ATP grants have been funded by the Federal Government. The program is now completely funded by the State and is a great way for communities to get back some of their tax dollars.

The City of Tehachapi has an impressive record of being awarded ATP grants having qualified for funds in each of the first four grant cycles. Recipients need to score at least 90 out of 100 points in order to be eligible for funds. In Cycle 4 Tehachapi applied for funding for the Safe Routes to School Snyder Gap project and received a 94 out of 100 points, coming in 10th in the state. Other Tehachapi projects funded through ATP grants are the Valley Blvd. Bike Path, Safe Routes to School Gap Closure on Valley Blvd. from Curry to Dennison and the just completed Cherry Lane Curb and Sidewalk project. The upcoming Rail Corridor project including sidewalks on H Street and enhanced pedestrian rail crossings at Green and Davis is currently under contract.

The genius grant writer behind the City's grant proposals is Administrative Analyst Denise Montes who has worked in the Development Services Department for 13 years under Director Jay Schlosser. With the upcoming 2020 grant cycle, Montes thought the citizens of Tehachapi should have the opportunity for public input as to the needs of the community and where future ATP funds should be spent. Although the projects themselves must remain within the city limits, all residents of the Greater Tehachapi area can comment and make suggestions as well.

"All ideas are welcome regardless of where you live. Everyone uses the schools or can notice safety issues faced by non-motorized transportation users," said Montes. "However, the City can only apply for funds to be used within City Limits."

The ATP Grant application process opens in March with all applications due by June. Grantees are announced at the end of the year. The public is encouraged to email ideas to [email protected] by the end of January and include the project location, describe the suggested project and include a picture if possible. Montes said she plans to compile all the data received by January and prepare the selected Grant Application(s) for timely submittal.