A tale of two cities: Grapevine and Centennial 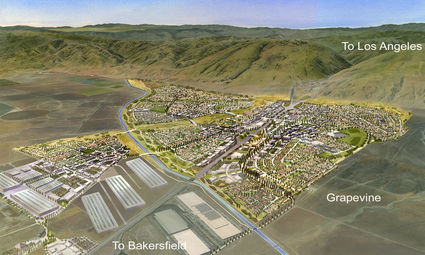 The Kern County Board of Supervisors on Dec. 10 re-approved the Grapevine master planned community development following a year's delay to meet an environmental challenge from the Center for Biological Diversity.

"This is a cutting-edge project," Dist. 2 Supervisor Zack Scrivner of Tehachapi said prior to the 5-0 vote. "It was when we approved it in 2016. It is even better now, with additional analysis. People will be able to live, work and recreate in a close proximity."

"This project is the pinnacle of land use models in the U.S.," 5th District Supervisor Leticia Perez said. "It provides new opportunities for even more people. We are blessed to have such an operation...We have lots of people eager for upward mobility – desperate, I would say-and without these opportunities they are simply not going to be realized."

Following the Supervisors' original approval of the Grapevine project in 2016, environmental opponents challenged the county on seven items, of which the judge rejected six. The judge ordered new information on the percent of vehicle trips within the community.

"There is an agreement with Caltrans in terms of mitigation that is consistent with the rest [of the Environmental Impact Report]," Barry Zoeller, Tejon Ranch Sr. Vice President, Corporate Communications and Investor Relations, said.

Meanwhile, on the south side of the Kern County line, environmental opponents the Center for Biological Diversity and the California Native Plant Society are challenging the Los Angeles County Supervisors and the Tejon Ranch Company on the master planned Centennial development, also on Tejon Ranch property. Centennial is entirely in Los Angeles County and would cover much of the west end of the Antelope Valley.

In order to build three developments on its property, the Tejon Ranch company – the largest private landowner in the state of California – in 2008 came to an agreement with five environmental groups, the Sierra Club, the Pine Mountain Club, the Planning and Conservation League, Audubon California and the Endangered Habitats League. Under the agreement, 90 percent of the vast 270,000-acre property will be kept natural and pristine in perpetuity. in return, the environmental groups agreed not to attempt to stop development on the remaining 10 percent. Part of the agreement features a re-routing of the Pacific Crest Trail (PCT) through Tejon Ranch property. The PCT negotiations with the ranch and other landowners on the proposed trail route are ongoing.

The Centennial development in LA County would provide 19,333 living units, 18 percent of which would be in the official affordable category. It would cover 12,323 acres of what is now grassland and farmland.

Zoeller said that transfer fees from Centennial home sales would go to support the Tejon Ranch Conservancy, whose funding from the ranch company is due to expire in 2021.

Zoeller described the Center for Biological Diversity as "somewhat intractable."

"The Center for Biological Diversity bailed prior to the final (2008) agreement so they could file a lawsuit," Zoeller said. "That's their business. They are the most litigious environmental group in the country."

In the petition for a Writ of Mandate, the petitioners state that the Centennial project permits construction on "some of California's largest remaining native grasslands and revered wildflower fields, atop the San Andreas and Garlock earthquake faults." The project, located 65, 50 and 35 miles from the job centers of Los Angeles, Bakersfield and Santa Clarita, respectively, the writ says, "is exactly the type of leapfrog sprawl development that climate legislation such as SB 375 sought to prevent."

The project would require extensive infrastructure, offsite construction and trenching, and extensions of electrical, telephone, cable and water alignments. The petition states the area is windy, in danger of wildfires and there's not enough water to serve the planned community.

In the Statement of Overriding Considerations for the Centennial Specific Plan Project, the lead agency -- the County of Los Angeles Department of Regional Planning -- stipulated that there will be significant and unavoidable impacts from the Centennial development, and 642 acres of prime farmland would be converted. 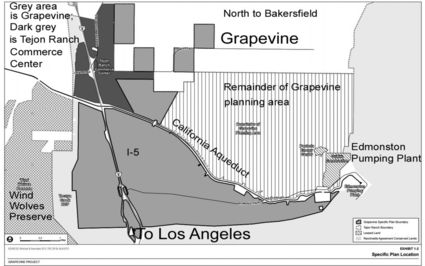 The Statement said, however, that the additional housing would help alleviate the housing shortage in the state of California: "Despite the implementation of all feasible and reasonable mitigation, the project would result in a maximum resident population of approximately 57,150 persons at project buildout, which is estimated to occur in 2035. This would represent 14.1 percent of the buildout population of the Antelope Valley's unincorporated area, and would result in a population increase that would be consistent with the anticipated population increases under the Antelope Valley Area Plan (AVAP). Implementation of the project is considered growth accommodating rather than growth inducing at a regional level based on Southern California Association of Governments (SCAG)."