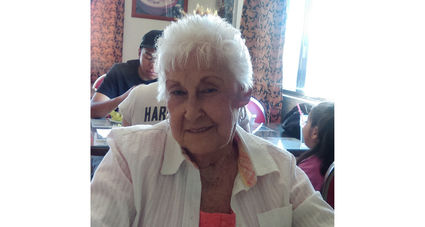 Prior to her 32 years in Tehachapi, she raised her four children and was a private caregiver to families in the Antelope Valley. For more than 16 years, Theresa worked as a Tehachapi Unified School District cafeteria worker, while simultaneously operating a private day care in West Golden Hills.

Her daughter, Barbara Minniear, said while her day care tots were enjoying their lunch and taking a rest, her mom would head over to Golden Hills Elementary to fulfill her lunch lady duties and fill the tummies of hungry students.

"She was always focused on ensuring the children had healthy meals that were served with love and attention," she said.

Barbara said she was completely committed to being a mom and raising her own children. Once her kids were grown, it felt natural that she would continue to care for children. "It was her calling," Barbara said.

"She literally provided after school care for many of the kids attending the local schools. So she was very involved with her kids at the cafeteria, as well as on personal family levels," she said. "She made day care affordable for larger families, meaning, she cut her fees back for special needs kids and even provided free care for some kids and their families when in need."

When Theresa passed away on Aug. 17, she left behind a community of grateful children.

Barbara and her friend Angela Nielsen wanted to find a way to honor Theresa and her commitment to Tehachapi's children. Angela had the idea to start a fundraiser raising money for the Kids' Lunch Program.

"I was just honored that we chose my mother to be the focus of this honor and remembrance of those who genuinely care," Barbara said.

So far, they have been able to pay off the school lunch debt at Golden Hills Elementary. They are currently working on paying the $3,084 lunch debt at Tompkins.

A donation jar is available at Tompkins and the family and friends of Theresa would love the community to help by making a donation in her memory.

Do you know an inspirational group, individual or program that should be featured in an upcoming Grassroots Tehachapi? Email me at grassroots.tehachapi@gmail.com.